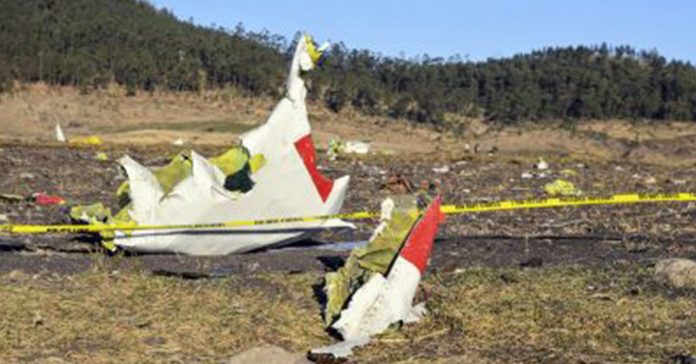 The airline said 149 passengers and eight crew members were on flight ET302 from the Ethiopian capital to Nairobi in Kenya.

It said 32 Kenyans, 18 Canadians, eight Americans and seven British nationals were among the passengers.

The crash happened at 08:44 local time, six minutes after the months-old Boeing 737 Max-8 took off.

Another plane of the same model was involved in a crash less than five months ago, when a Lion Air flight crashed into the sea near Indonesia with nearly 190 people on board.

Do we know how it happened?

The cause of the disaster is not yet clear. However, the pilot had reported difficulties and had asked to return to Addis Ababa, the airline said.

“At this stage, we cannot rule out anything,” Ethiopian Airlines CEO Tewolde Gebremariam told reporters at Bole International Airport in Addis Ababa.

“We cannot also attribute the cause to anything because we will have to comply with the international regulation to wait for the investigation.”

Visibility was said to be good but air traffic monitor Flightradar24 reported that the plane’s “vertical speed was unstable after take-off” .

An eyewitness at the scene told the BBC there was an intense fire as the aircraft hit the ground.

“The blast and the fire were so strong that we couldn’t get near it,” he said. “Everything is burnt down.”

Recovery operations were under way near the crash site around the town of Bishoftu, which is 60km (37 miles) south-east of the capital.

The plane was delivered to Ethiopian Airlines on 15 November last year. It underwent a “rigorous first check maintenance” on 4 February, the airline tweeted.

Who are the victims?

Mr Gebremariam told the news conference that passengers from more than 30 countries were on board the flight.

Slovak MP Anton Hrnko later confirmed via Facebook that his wife and two children were on the plane.

One person held a UN passport, the airline said. It believed some passengers could have been heading to a session of the UN Environment Assembly which begins in Nairobi on Monday.

A UN source also told Agence France-Presse that “at least a dozen of the victims were affiliated with the UN”, and that this may include freelance translators.

The WFP family mourns today — @WFP staff were among those aboard the Ethiopian Airlines flight. We will do all that is humanly possible to help the families at this painful time. Please keep them in your thoughts and prayers.

Among them was engineer Michael Ryan, a father of two, from Cork, Ireland. Taoiseach (Prime Minister) Leo Varadkar said Mr Ryan had been “doing life-changing work in Africa”.

One of the Canadian victims was named as Prof Pius Adesanmi, an expert in African studies at Carleton University in Ottawa.

The pilot was named as Senior Captain Yared Getachew who had a “commendable performance” with more than 8,000 hours in the air, the airline said.

What reaction has there been?

Ethiopia has declared Monday a national day of mourning.

Canadian PM Justin Trudeau said he was “deeply saddened” to hear of the crash, adding: “We join the international community in mourning the loss of so many lives.”

“I was deeply saddened to hear of the devastating loss of life following the plane crash in Ethiopia. At this very difficult time my thoughts are with the families and friends of the British citizens on board and all those affected by this tragic incident.” – PM @Theresa_May

French President Emmanuel Macron expressed solidarity with the people of Ethiopia and Kenya , tweeting: “We share their sorrow.”

António Guterres, the UN secretary-general, also tweeted about the crash.

Deeply saddened by the news this morning of the plane crash in Ethiopia, claiming the lives of all on board. My heartfelt condolences to the families and loved ones of all the victims — including our own @UN staff — who perished in this tragedy.

Mahboub Maalim, executive secretary of the East African bloc Igad, said the region was in mourning.

“I cannot seem to find words comforting enough to the families and friends of those who might have lost their lives in this tragedy,” he said in a statement.

What do we know about the plane?

The 737 Max-8 aircraft is relatively new to the skies, having only been in commercial use since 2017.

Boeing said it was “deeply saddened” by the crash and offered to send a team to provide technical assistance. 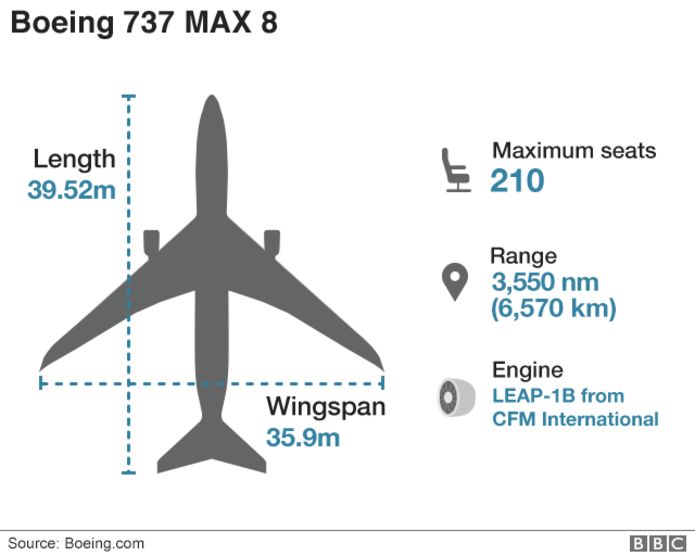 Following the Lion Air crash last October, investigators said the pilots had appeared to struggle with an automated system designed to keep the plane from stalling – a new feature of the Boeing 737 Max.

The anti-stalling system repeatedly forced the plane’s nose down, despite efforts by pilots to correct this, findings suggest.

There is no suggestion that the Ethiopian Airlines jet suffered similar issues on Sunday.

What about the airline’s safety record?

Ethiopian Airlines flies to many destinations in Africa, making it a popular carrier in a continent where many airlines fly only from their home country to destinations outside Africa.

It has a good reputation for safety, although in 2010 one of the company’s aeroplanes crashed in the Mediterranean Sea shortly after leaving Beirut.

The incident killed 90 people on board.

The airline’s highest fatalities prior to this came in a November 1996 crash during a hijacking on a flight from Addis Ababa to Nairobi.

One of the plane’s engines stopped when the fuel ran out and although pilots attempted an emergency water landing, they hit a coral reef in the Indian Ocean and 123 of the 175 people on board were killed.

Are you near the airport or in Bishoftu? If you witnessed the crash please email haveyoursay@bbc.co.uk .

Please include a contact number if you are willing to speak to a BBC journalist. You can also contact us in the following ways: