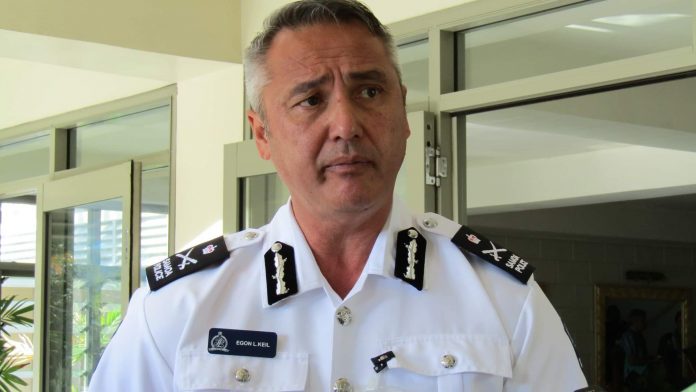 Two custodies who escaped from prison staff while being held at the courthouse lock-up area were at large for two days before being apprehended by police, and charged for escaping.

Police Commissioner Su’a Fuiavailiili Egon Keil says the custody officer responsible has been suspended while an internal investigation is being conducted.

“This was the result of no proper systems in place, the need for better coordination and faakamala of staff”.

The Commissioner says the investigation is ongoing, but the incident occurred while a prison staff was watching multiple custodies, waiting to appear in Court.

“It was the week before last; but they were brought back in, and they now both face additional charges”, said the Police Commissioner.

Su’a Fuiavailiili says a Memorandum of Understanding (MOU) is now being developed between the Office of the Attorney General (OAG), the Ministry of Justice and Courts Administration (MJCA) and the Ministry of Police Prisons and Corrections (MPPC).

“We are now working to mitigate and formalise respective responsibilities; and I have since created a Court Liaison Unit which will deal specifically with court requirements and focus on solutions to problematic areas”.

The Police Commissioner says mutliple issues within the Prisons have surfaced since the Samoa Police Service took over just two months ago, with many attributed to lack of systems and proper process.

“Police recently inherited the Prisons and all of its problems, and the Police is focusing on finding fixes by putting systems in place and working with other relevant agencies to remedy issues”, adds the Commissioner.

According to Su’a a contributing factor is that Prison staff are getting multiple instructions from various enties to bring custodies and prisoners to Court.

“The staff are confused who to listen to..the instructions are being given verbally and by email, by MJCA, Courts, or Prosecutions Section of OAG often with no proper documentation;

“Last minute instructions to bring custodies to Court has been an issue and this has contributed to the confusion, logistcs problems and ultimately escape”, added Su’a Fuiavailiili.

Su’a says prisons management have come to recognise the issues, “and are helping us to find systemic solutions to the many problematic and potentially problematic areas”.

Earlier this week Su’a was issued various warnings by Supreme Court Justices whose already tight schedules for hearings and sentences faced serious disruptions when defendants failed to be brought into Court.

Supreme Court judges were told by OAG Prosecutors that Police were not cooperating with requests to transport defendants, due to appear in Court. Scheduled and rescheduled sentences and hearings were forced to be further postponed last week in Samoa’s Supreme Court.

Su’a says he has since apologised on behalf of the Ministry to Acting Chief Justice Vui Clarence Nelson and Supreme Court Justices Tafaoimalo Leilani Tuala-Warren and Leiataualesa Daryl Clarke.

“I’ve met and explained the issues, possible way forward and apologised on the behalf of the Ministry; and requested their input on solutions”.

“Police will always be subject to the rule of law and comply with all Orders issued by the Courts”.