29 June 2021 Mulinuu Samoa. The winning HRPP candidate for the Upolu seat of Sagaga 4, Tuisa Tasi Patea, says he intends to resign from his seat in order to allow a rematch as requested by his petitioner, Tagaloatele Poloa of Faatuatua i Le Atua Samoa ua Tasi.

The matter was to be called before the Supreme Court this morning but instead counsels from both sides went into a two hour meeting with Judges in Chambers. Representing FAST candidate Tagaloatele was Alex Sua, while Arthur Lesa and Lucy Sio-Ofoia represented the respondent, Tuisa Patea.

It is understood Tagaloatale would only agree to withdraw his election petition against the HRPP winning candidate, if Tuisa would resign and allow a return to the polls for a by-election. 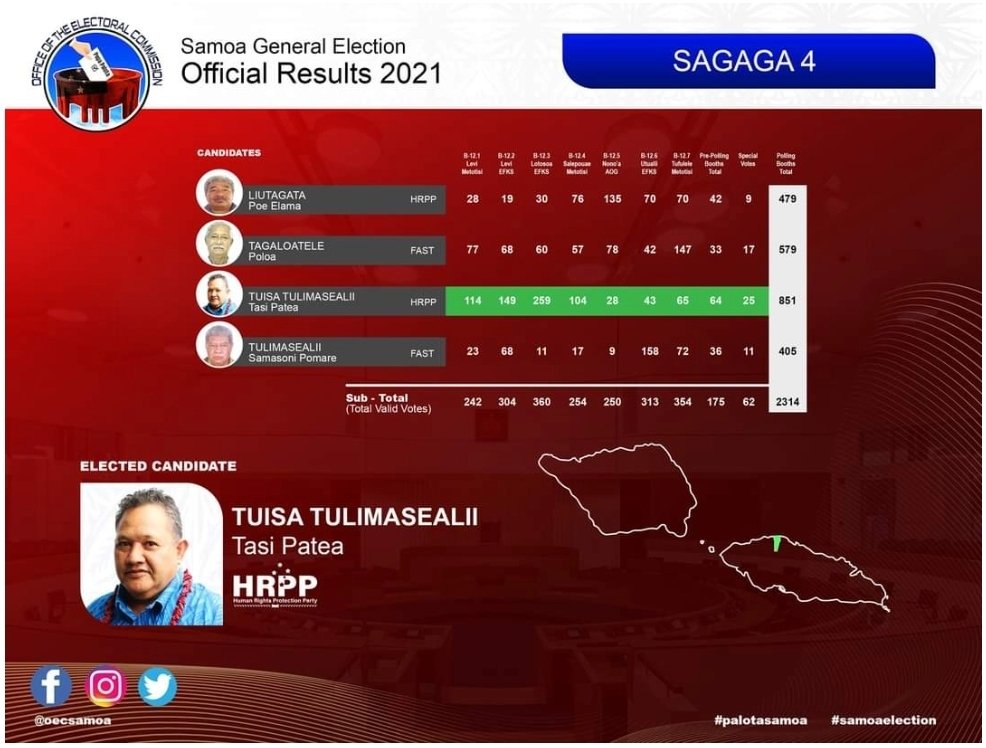 Leaving Court, Tuisa told Samoa Global News both sides have agreed to withdraw petitions and counter-petitions, and return Sagaga 4 district to the polls for a by-election.

Outside Court there was tension in the exchange of words between a high chief of Levi Saleimoa, Luātua Semi Epati and Tuisa.

Luātua told the members of the constituency present that such negotiations between candidates should be done at Saleimoa.

“We cannot discuss issues of our village here we must return to the land and our district where our words are covered and protected… whatever happens here is burried here and forgiven..” said the chiefly orator.

High chiefs from Saleimoa calmed the tension between Tuisa and Luatua and advised that they should go back to the village to negotiate.

Chief Justice Satiu Simativa Perese has adjourned the matter to 7 July for the withdrawal to be advertised as required by Law.