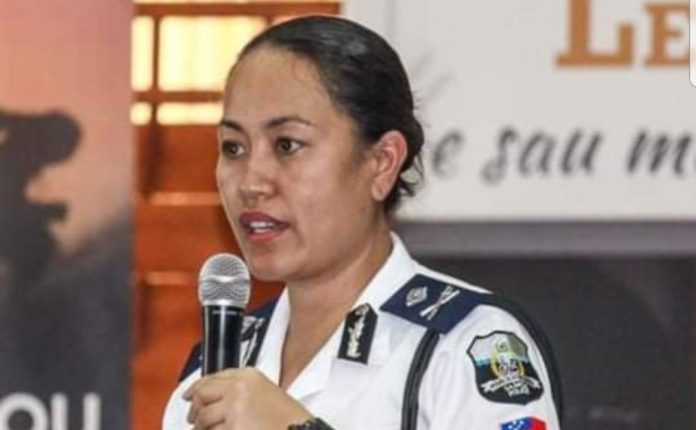 Papalii Monalisa Tia’i Keti is the first woman to reach the position of Assistant Commissioner within the Samoa Police Service.

Speaking at the celebration of International Women’s Day at the Tooa Salamasina Hall in Apia yesterday, Papalii encouraged young women present to consider jobs that have become typically accepted by society to be “for boys only”.

She spoke about the many changes that had been implemented within the Samoa Police Service to ensure gender equality and facilitate equal opportunities for women.

“I believe that with heart, passion and determination this job can be done by women”.

Last year Samoa celebrated 50 years since women first joined the Samoa Police Service and today 26% of the 668 police in Samoa are women.

Papalii said the current structure of the SPS has a management team of three and two of them are women.

“That means that most of the advice given to the Police Commissioner, comes from the two of us”, said Papalii.

Papalii added that the increase in women’s participation in SPS has lifted the quality of service to the Samoan public.

Papalii Monalisa grew up in the compound of Papauta Girls College. Her father had worked as the night watchman and a carpenter for the college. Her Papalii title is from the side of her father’s family.

She joined the Samoa Police Service in 2004 when she returned from the University of Waikato in New Zealand.  Papalii holds a Bachelor of Science, and a Masters degree in Transnational Crime. She is also working towards the completiok of her law degree at the University of the South Pacific.

Papalii spoke about the transformational change that had to be made to address the mindset that the police force was a last resort option for school leavers.

“Many who graduate with degrees, they don’t make the police force their first option for work”.

“When I finished high school at Samoa College, I had wanted to become a lawyer”, said Papalii.

The Assistant Commissioner shared the challenges she endured when she had first joined SPS as a returning graduate.

“Historically police officers were those who did not attend university or hold tertiary degrees, so the older members of the police force found it difficult to accept younger memebrs with degrees.

“Working in the Ministry of Police was like a job for those who could not secure work in other more high profile government ministries”.

Papalii and others in the Samoa Police Service have since broken that barrier and shifted that mindset.  The latest intake of police in January 2020 had 28 women and 18 men between the ages of 22 years to 45 years.

As a guest speaker, Papalii also highlighted domestic violence towards women and girls as the highest type of crime being reported to SPS.

“It is an area where there is a high rate of cases coming through to be reported and prosecuted through the Courts, but I believe that it is an issue that if we stand together, we can combat.”

Over 80% of female respondents to a national public inquiry into family violence in Samoa reported having been subjected to physical and emotional abuse in their lifetime.