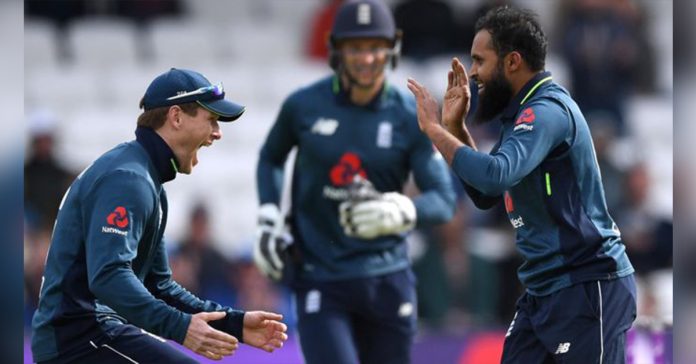 19 May, 2019. By Stephan ShemiltBBC Sport at Headingley, Leeds. England comfortably defeated Pakistan in their final one-day international before the World Cup to complete a 4-0 series victory.

Joe Root’s 84 and 76 from captain Eoin Morgan helped lift the home side to 351-9, a total that looked like being much higher after a rapid start at Headingley.

Pakistan seemed all but beaten after Chris Woakes’ new-ball burst reduced them to 6-3, only for Babar Azam (80) and Sarfaraz Ahmed (97) to share a partnership of 146.

But Babar was run out by a clever flick from Adil Rashid and Sarfaraz was brilliantly run out by Jos Buttler, either side of Rashid’s flying catch to dismiss Shoaib Malik off his bowling.

England will name their World Cup squad on Tuesday, then play two warm-up games that do not have ODI status, against Australia next Saturday and Afghanistan the following Monday.

They open the tournament against South Africa at The Oval on 30 May.

This series has seen England demonstrate their awesome batting power and attempt to identify the pace bowlers that will be included in their final squad.

On a day when captain Morgan chose to bat in order to replicate losing the toss and being made to post a total in the World Cup, it was a last chance for fast bowlers David Willey and Tom Curran to push their claims.

Willey offers a left-arm option, Curran yorkers and slower balls. Both can bat and made useful lower-order contributions, but neither bowled a telling spell.

In may be that Curran, Willey and Liam Plunkett are fighting for two spots to join Woakes, Mark Wood and Jofra Archer.

Joe Denly, in England’s provisional squad to bat and bowl some leg-spin, was not afforded another opportunity. If England want a stronger bowler, he could make way for Liam Dawson.

As for Pakistan, experts at peaking in tournaments and winners of the Champions Trophy here in 2017, they have shown glimpses of their potential at various times throughout the series.

In Leeds, their pace bowlers showed signs of improvement, while Babar and Sarfaraz were defiant.

They will be benefit from the return of leg-spinner Shadhab Khan, who can play in the World Cup after recovering from hepatitis.

England’s batsmen at it again

Aided by poor Pakistan bowling and worse fielding, the rate England began their innings hinted towards an absolutely massive total.

That it did not materialise was down to the control gained by Pakistan’s spinners and the recovery of their pace bowlers, none more so than Shaheen Afridi, who picked up 4-82.

But that is to take nothing away from England’s batsmen. Openers Jonny Bairstow (32) and James Vince (33) punished anything loose before Root and Morgan added 117 for the third wicket.

Root played drives off the pacemen, then flicked and swept the spinners. Morgan heaved two sixes into the leg side and lofted two more inside-out over extra cover.

When Morgan became one of four England batsmen to fall to the short ball, it began a period where every home surge was halted by a wicket.

Jos Buttler (34) and Ben Stokes (21) made contributions, but there may be a slight concern over Moeen Ali, who registered a second successive duck.

Woakes, Willey and Curran played cameos, the latter’s 29 from 15 balls full of entertaining swipes and scoops.

For all the talk of the extra pace of Archer and Wood, it is Woakes who is likely to lead England’s World Cup attack and his first two overs proved why.

On a surface offering just a hint of movement, his full length had Fakhar Zaman held at second slip, then both Abid Ali and Mohammad Hafeez lbw.

The classy Babar and doughty Sarfaraz rebuilt with deflections, guides and good running. They were comfortable before England’s first flash of inspiration.

Sarfaraz sent Babar back, Buttler’s throw was wide but Rashid, with his back turned, backhanded the ball on to the stumps to leave Babar short.

In response, Sarfaraz repeatedly sent Rashid to the leg-side boundary, only for the England man to leap to his left to take an excellent one-handed catch off Malik.

The captain presented England’s last realistic obstacle until he was removed by Buttler’s luck, anticipation and quick-thinking.

As Sarfaraz tried to run Moeen to third man, Buttler stuck out his right boot. The ball rebounded into his left foot and, with Sarfaraz trying to get back after setting off for a run, Buttler removed the bails.

‘I’m proud of the guys’ – what they said

England captain Eoin Morgan on Test Match Special: “I am very proud of the guys and the way they have performed throughout the series. The nature of how we have chopped changed our team – the performance of the side has remained consistent.

“That shows a lot of hunger in the squad and no-one can be faulted. Everyone has performed and today was same.”

Chris Woakes, who was named man of the match: “It’s been a great series for us and a great few weeks for us against a strong Pakistan team. The confidence is high and keeps everyone on their toes. We are always trying to improve and it is a great place to be.

“We are wishing each other the best and enjoying our success. Thankfully it was my turn to take the wickets today but we like to share it around.”

Former England batter Ebony Rainford-Brent, TMS analyst: “Clinical is what comes to mind about England throughout the series. Everyone stepped up.

“The key questions have been answered – Archer stepped up and the players who were injured held up nicely.

“There are selection issues but England have a luxury of players to turn to.”