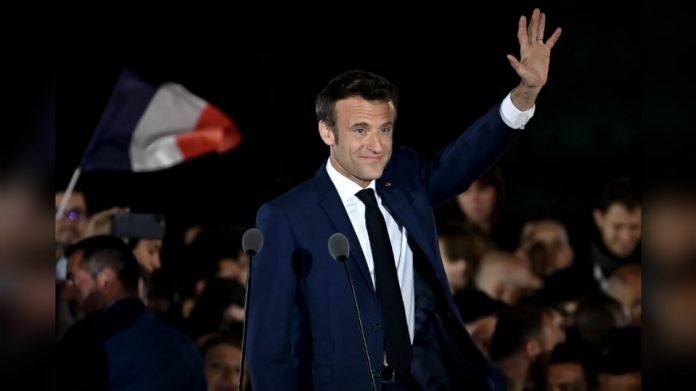 Emmanuel Macron has won five more years as French president after a convincing victory over rival and far-right candidate Marine Le Pen who still won more than 12 million votes in a historic high for her anti-immigration party.

Macron became the first French leader to win a re-election for 20 years, scoring a clear margin of 58% to 41% after round 2. The centrist leader told jubilant supporters at the foot of the Eiffel Tower that now the election was over he would be a “president for all”.

“I know that a number of French people have voted for me today, not to support my ideas but to stop the ideas of the far right,” he said and called on supporters to be “kind and respectful” to others, because there was “so much doubt, so much division” in the country.

He added: “I’m not the candidate of one camp any more, but the president of all of us.”

Although much of France was on holiday on the day of the vote, the low turnout reflected the apathy of voters who complained neither candidate represented them. A large proportion of young voters were said to have avoided the second round.

Far-left leader Jean-Luc Mélenchon, who was narrowly beaten by Ms Le Pen in the first round of voting two weeks before, was scathing about both candidates.

He said it was good news France had refused to place its trust in Marine Le Pen, adding that Mr Macron had been elected in a worse way than any other president. “He floats in an ocean of abstentions, and blank and spoiled ballots.”

Macron is set to use his win to bolster his push for an increased EU defence project, closer collaboration on immigration and more regulation to counter the weight of giant tech platforms such as Google. France holds the rotating European Council presidency until the end of June.

Macron had framed the choice between himself and Le Pen as “a referendum on Europe, ecology and secularism” and said the far-right leader’s demands for EU treaty change would have led to France being pushed out of the bloc. He called her a “climate sceptic” and said her plan to ban the Muslim headscarf from all public places, including the street, would breach the French constitution and religious liberties, and “spark a civil war”.

The ideas her National Rally represented, she told her supporters, had reached new heights. But far-right rival Eric Zemmour pointed out that she had failed just like her father who preceded her: “It’s the eighth time the Le Pen name has been hit by defeat.”

Le Pen succeeded in delivering the far right its biggest-ever score in a French presidential election, after campaigning on the cost of living crisis, and promising a ban on the Muslim headscarf in public places as well as nationalist measures to give priority to native-French people over others for jobs, housing, benefits and healthcare – policies Macron had criticised as “racist” and “divisive”.

For his first step, Macron has promised to introduce a package of measures to ease the pressure of the cost of living crisis before summer, including continuing caps on gas and energy prices.