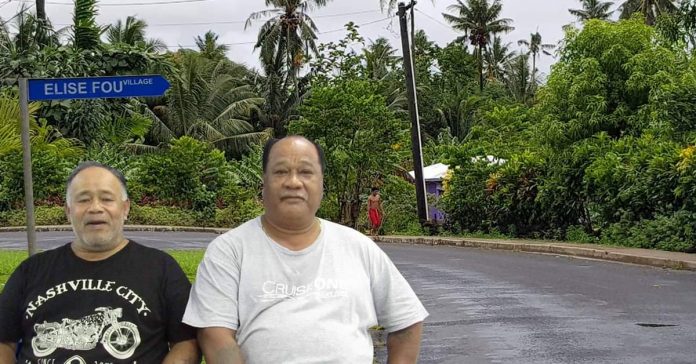 The Village Mayor or Sui o le Nuu for Elise has come forward to correct a statement made by the Prime Minister and Minister for Police about the village of the four youth arrested in connection with the death of a Chinese national, Mr. Cao Yaqing.

The Pacific Trade Industrial Company at Vaitele owned by Mr Lin was invaded by youth on Saturday night on what now seems to be a robbery invasion gone horribly wrong.

Four youth were arrested on Sunday and last night the Prime Minister and Minister for Police said on national television that he had been told by Police that the youth were in their 20s from the villages of Vaiusu and Elise.

Village Mayor of Elise Tamalema’i Fiapule Sueni  told Samoa Global News that Elise is a gated community and that the young men detained by Police live just behind their fence.

“They live just behind the fence that forms the boundary between Vaiusu and Elise”.

The Village Mayor was joined by another senior member of the village, Matakea Ngalu who added that the youth from this family who live just behind their fence are from Vaiusu and they are well known troublemakers in their area.

Matakea Ngalu was very upset about the mention of their village because he says, they take pride in looking after their youth and keeping a close eye on them.

“They are well known for throwing stones at cars, and other things that causes general disruption around our neighbourhood”.

The road going back to where the arrested youth live has a road sign, Elise Fou, which could have led police to believe they had captured the youth from Elise.

In the meantime, Member of Parliament for Faleata Leaitnuu Faumui Wayne Fong has stepped up to take responsibility for the youth confirming that they are from Vaiusu and Vaigaga.

“My deepest condolences to the Chinese Community in Samoa especially the Chinese Company whose employee lost his life by this barbaric act of the boys involved;

“Our Faleata Constituency are greatly saddened by this horrible incident and we sincerely hope that it  will not happen ever again.