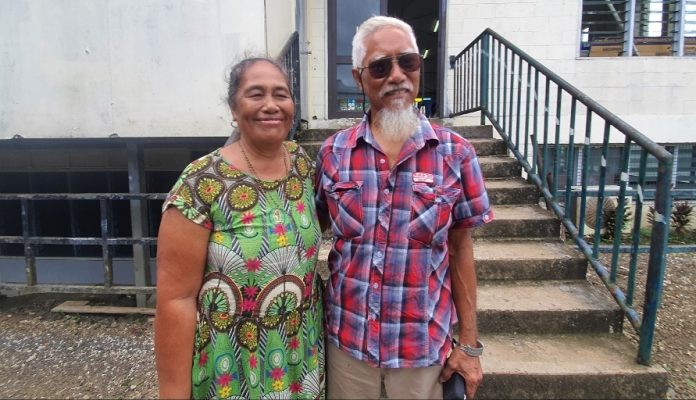 Pre-polling for Samoa’s 2021 General Elections started on Monday to allow over eight thousand pre-registered elderly, persons with disabilities and essential workers to cast their votes before the official polling day this Friday 9th April 2021.

It is the first time for Samoans to experience pre-polling and one 69 year old grandfather is thankful for the opportunity and has much to say about the benefits of the process.

“I think this is a great thing the government has done,” says Sofine Chan Foung of Saleufi, Moamoa and Manono.

“It is so peaceful here today..and there’s noone here to pressure or coerce us into voting for their candidate”.

Mr Chan Foung says he felt free to cast his vote without committee members looking over him.

“Look how empty it is, we don’t have to face any committee members like in the past years,” says Mr Chan Foung referring to candidate campaign committees who would congregate by voting booths.

He praised the Office of the Electoral Commissioner for the initiative that has allowed himself and his wife Ianina to pre-poll.

Mrs Ianina Chan Foung voted in Manono yesterday for the Aiga i le Tai constituency. She shared the same experience and said the best thing for her was to not have to stand in long lines.

“Manono was also peaceful like this. We drove up, i jumped out of the car, went in and voted, and off we went again,” said Mrs Chan Foung.

Parents of five adult children, Mrs Chan Foung said they value their right to vote for good candidates that would make decisions for the future of Samoa and especially their children.

The couple have three kids living overseas and two boys here in Samoa.

“Our son Joe works at Samoana Rental and our other son Paulo runs a foodstall at the Fugalei market,” Mr Chan Foung says proudly of his sons.

“Marie and Tino are in Chirstchurch, Lesina and Joe live in Auckland and our son Edward and Anna live in Brisbane,” he adds.