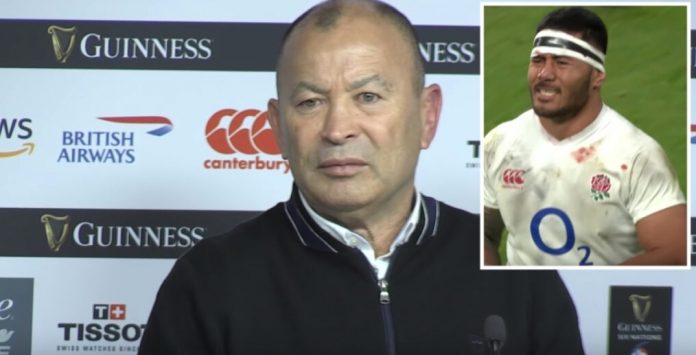 The 28-year-old Samoan-born centre from Fogapoa Savaii was shown a straight red in the dying minutes of the game for a tackle on Welsh winger George North.

Eddie Jones expressed his disappointment during the post match press conference. “I usually do not comment on incidents like this but I am breaking my rule because I found the red card bizarre. I do not know how you are meant to make a tackle when a guy is falling after a chop tackle.

“Manu was coming over the top to kill the tackle. It’s absolute rubbish and there is no common sense in such situations,” said the former Australian coach and player, who has been the head coach of the England national team since 2015.

Manu Tuilagi was sent off by referee Ben O’Keeffe (pronounced ‘i’ not ‘e’) with four minutes left on the clock. England were 17 points ahead at 33-16 at the time.

The red card was the first time an England player had been dismissed in a championship match.

The send-off meant England were players down, with prop Ellis Genge already in the sin-bin.

Eddie Jones criticised O’Keeffe saying he made up the 16th man for Wales.

In the 78th minute, Daniel Biggar gets a ball off the scrum and goes over for a try which he quickly converts himself. Wales crossed the line again on the 80th minute to narrow the final score to 33-30.

England came away with the win over the reigning champions to conclude their Six Nations campaign for 2020.

Manu Tuilagi has earned 43 caps for England since making his international debut in 2011 and scored 18 times along the way.

Full match highlights are available below: