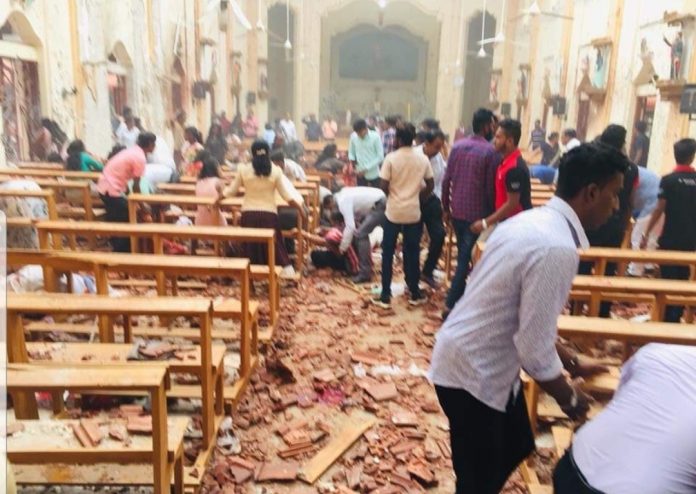 Scores of people have been killed and hundreds wounded in a series of 8 blasts that has rocked Sri Lanka on Easter Sunday. Explosions have occurred in the capital Colombo, as well as in a town north of the capital and a town on the east coast. Churches, 3 popular hotels, and a housing development were targeted. Nobody has claimed responsibility so far.

What are the casualty figures?

Officials in Sri Lanka say at least 207 people have been killed, according to the Associated Press, and 450 have been wounded.

The BBC reports that several foreign nationals are among the dead. According to AFP, as many as 35 foreigners may have died.

Where did the explosions take place?

Four explosions took place in Colombo, one at St. Anthony’s Shrine and three at hotels, reported by the BBC to be the Shangri La, Cinnamon Grand and Kingsbury hotels. The Cinnamon Grand is near the official residence of Sri Lanka’s prime minister Ranil Wickremesinghe.

AP reports that explosions also occurred in St. Sebastian’s Church in Negombo, a town north of Colombo that is home to many Catholics, and in the eastern town of Batticaloa at the Zion Church.

AFP reported that a seventh blast took place at approximately 04:50 ET killing two more people. CNN reported that the blast occurred at a guest house in Dehiwala-Mount Lavinia, outside of Colombo.

Local media reported that an eight blasts took place at around 05:10 ET at a housing project in Dematagoda, a suburb of Sri Lanka. A Reuters journalist in Colombo said three police officers were killed in the blast.

What have eyewitnesses said?

A priest at St. Sebastian’s Church told CNN that the ground there was covered in glass and rubble and shattered glass.

“You can see pieces of flesh thrown all over the walls,” he said.

Sri Lanka’s Minister of Economic Reforms and Public Distribution, Harsha de Silva, said he had been at St Anthony’s Shrine, and described “Horrible scenes. I saw many body parts strewn all over.”

One resident of Colombo tweeted that many Sri Lankans had arrived at the National Blood Centre to give blood donations. “It’s so overcrowded they cannot control the crowd. Currently they are sending back people who have come after taking down name, contact and blood group,” he said of the overwhelming response.

Sarita Marlou, whose Facebook page appears to indicate that she is a singer at the Shangri-La, was at the hotel when the blast happened. According to her Facebook post, the explosion was at the Table One restaurant on the third floor of the building.

“Felt the blast all the way up to the 17th floor where we were sleeping. Few minutes later, we were asked to evacuate the hotel. While running down the stairs, saw a lot of blood on the floor but we were still clueless as to what really happened,” she wrote.

“Only after we got out of the hotel that we knew about the unfortunate incident and that it also hit two other nearby hotels, Cinnamon Grand and The Kingsbury. Apparently, churches were bombed, too. What a tragic day for Sri Lanka indeed.”

Chris Plosaij, who was visiting Colombo from Hong Kong, told TIME he and a friend were having breakfast at Shangri-La at around 9 am. Shortly after eating, they went upstairs to their room on the 23rd floor.

“First, we heard something that sounded like someone on the floor above or below had dropped a really heavy cart. About 10 or 15 seconds later, we heard a really loud blast,” Plosaij said.

They were then told to evacuate over loudspeakers. Plosaij described seeing blood as as they walked down the stairs, especially when they reached the lower floors. They could also hear yelling and screaming coming from the hallways.

“The ceiling caved in,” he recalled, describing the third floor of the hotel where the blast took place. “Some windows had been blown out.”

What is known about the perpetrators?

The defence minister, Ruwan Wijewardene, says seven people have been arrested in connection with the attacks.

An official told AP that two of the blasts were suspected to have been carried out by suicide bombers. Nobody has stepped forward to claim responsibility.

News agency AFP says it has seen documents that show that Sri Lankan police have been on the alert for several days, fearing that suicide bombers from a local radical Muslim group, the National Thowheeth Jama’ath (NTJ) were targeting prominent churches.

A number of Sri Lankan Muslims were known to have joined ISIS in Syria, according to Reuters.

What has the response been?

Ruwan Wijewardene, Sri Lanka’s minister of defense and mass media, has ordered a temporary ban on social media and a 12-hour curfew from 6pm local time, according to a tweet sent out by his cabinet colleague Harsha de Silva.

Wijewardene described the attacks as “a terrorist incident.”

In a tweet, the prime minister said “I strongly condemn the cowardly attacks on our people today. I call upon all Sri Lankans during this tragic time to remain united and strong. Please avoid propagating unverified reports and speculation. The government is taking immediate steps to contain this situation.”

State media reported him as saying: ““I have given instructions to take very stern action against the persons who are responsible for this conspiracy.”

Mangala Samaraweera, Sri Lanka’s finance minister, tweeted that the blasts were “a well coordinated attempt to create murder, mayhem & anarchy.” He called for “All those who cherish democracy, freedom & economic prosperity” to “unite now with nerves of steel to defeat this heinous attempt.”

CNN, citing local media, Sri Lankan law enforcement have told the public to stay indoors and not to gather at the explosion sites or at the hospitals where the injured are being treated.

Leaders of Sri Lanka’s regional neighbors have condemned the attacks. “There is no place for such barbarism in our region,” Indian prime minister Narendra Modi tweeted. Pakistan’s prime minister Imran Khan tweeted that “Pakistan stands in complete solidarity with Sri Lanka in their hour of grief.”

AP reported that Pope Francis ended his usual Easter Sunday blessing by saying “I want to express my loving closeness to the Christian community, targeted while they were gathered in prayer, and all the victims of such cruel violence.”

Cardinal Malcolm Ranjith, the Archbishop of Colombo, called on Sri Lanka’s government to launch a “very impartial strong inquiry” and to punish those found responsible “mercilessly because only animals can behave like that,” AP said.

Muslim Council of Sri Lanka said it condemned the attacks “on our Christian brothers and sisters on their Holy Day of Easter, as well as on the hotels in Colombo.” It said that it mourned the loss of “innocent lives due to extremist and violent elements who wish to create divides between religious and ethnic groups to realize their agenda.”

The Shangri-la hotel in Colombo, where one of the blasts took place, issued a statement saying it was “deeply saddened and shocked by the incident and our thoughts and prayers are with the families of the casualties and those who have been affected.”

Local media is reporting that all schools will be closed for two days. Travelers are also being asked to arrive at Colombo airport four hours before their flightsbecause of additional security. They will be allowed to proceed through the curfew if they show passports and valid tickets at checkpoints.

What about sectarian tensions on the island?

While the majority (70%) of Sri Lankans are Buddhists, just under 10% are Muslims and about 7.5% are Christian. Hindus make up about 12.5% of the population.

Sri Lanka declared a state of emergency in March 2018 after Buddhist mobs attacked Muslim businesses, homes and a mosque in the central city of Kandy. The BBC reported that a Muslim man was found dead in a burned-out building. The attacks were reportedly in retaliation for the earlier beating of a Buddhist by Muslim men.

In recent years, hardline Buddhist groups such as Bodu Bala Sena (BBS), otherwise known as Buddhist Power Force, have been accused of stirring sectarian hatred in Sri Lanka. The BBS accuses Sri Lanka’s Muslims of threatening the nation’s Buddhist identity, and enjoys support at high levels of the political establishment.

In a 2014 interview with TIME, Jehan Perera, executive director of the National Peace Council NGO, said “Prejudices are growing because there is a small but influential group of extremist Buddhists who are having a relatively free run and are able to articulate very national sentiments and highlight the insecurity of the [ethnically dominant] Sinhalese.”

Hinduism is dominant in the north and east of Sri Lanka. In 2009, Tamil insurgents who fought to create an independent state in the north were defeated after a 26-year-long campaign.

This is a developing story