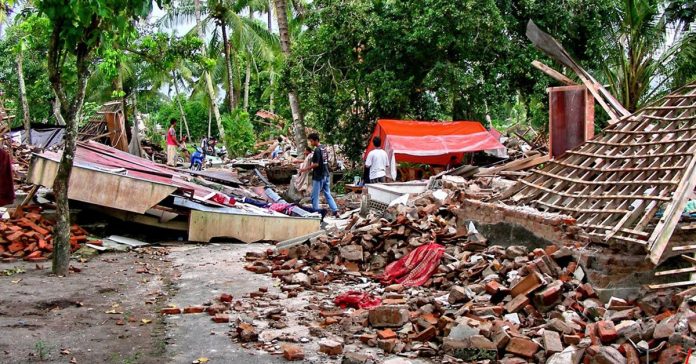 The 2006 Yogyakarta earthquake (also known as the Bantul earthquake) occurred at 05:54 local time on 27 May with a moment magnitude of 6.4 and a maximum MSK intensity of VIII (Damaging). Several factors led to a disproportionate amount of damage and number of casualties for the size of the shock, with more than 5,700 dead, tens of thousands injured, and financial losses of Rp 29.1 trillion ($3.1 billion). With limited effects to public infrastructure and lifelines, housing and private businesses bore the majority of damage (the 9th-century Prambanan Hindu temple compound was also affected), and the United States’ National Geophysical Data Center classified the total damage from the event as extreme.

Although Indonesia experiences very large, great, and giant thrust earthquakes offshore at the Sunda Trench, this was a large strike-slip event that occurred on the southern coast of Java near the city of Yogyakarta. Mount Merapi lies nearby, and during its many previous historical eruptions, large volume lahars and volcanic debris flowed down its slopes where settlements were later built. This unconsolidated material from the stratovolcano amplified the intensity of the shaking and created the conditions for soil liquefaction to occur. Inadequate construction techniques and poor quality materials contributed to major failures with unreinforced masonry buildings, the most prevalent type of home construction, though other styles fared better.