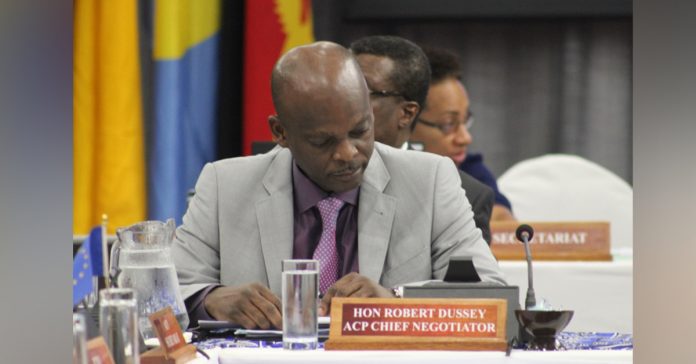 Pro. Dussey is also Minister for Foreign Affairs, African Integration and the Togolese Nationals Abroad of the Togolese Republic and  Chief Negotiator of the ACP Group for the Post Cotonou

ACP-EU NEGOTIATIONS: AFTER THE COMMON BASE OF THE POST-COTONOU, WE NOW SHIFT THE EMPHASIS ONTO THE REGIONAL PILLARS

The agreement currently being negotiated, and wlhich will underpin the ACP-EU partnership at the expiration of the Cotonou Agreement in 2020, is unprecedented for two reasons.

It is unique as well in its organic structure as in the approach.

The common basis of the agreement, on which both parties have already got their act together, will be applicable to all members of the partnership.

As for the regional pillars of the agreement, they are conceived in terms of the specifics of each of the geographical entities constituent of the ACP Group namely Africa, the Caribbean and the Pacific.

The other important innovation in the current negotiations lies in the latitude to each of the ACP regions to take charge of the negotiations on its pillar.

In the current negotiations, the ACP countries have adopted the principle of decentralization and distribution of responsibilities in order to bring the process in line with the regional and continental wishes for development and self- management.

The EU-Pacific regional partnership will enable the EU and the Pacific region to enhance and evolve the current relations between the EU and the region. By empowering the Pacific Islands Forum, whose work on regional environmental issues, in telecommunications, energy, fisheries and trade is known and recognized, we firmly believe that it will do a professional job in negotiating the Pacific Pillar. The regional base of the Pacific Islands Forum, its knowledge of the region’s strategic and economic priorities (Oceans gouvernance through the Blue Pacific identité ; Safeguarding the region’s ressources ans sécurité ; Bringing the Blue ans Green Econonmy to the forefront ; Commitment to addressing climate change and disaster résilience ; Économie Développent ) and its leadership in community integration convince us that it will be able to put forward the interests of the region and prepare for the benefit of the ACP Group a responsible EU-Pacific Regional Partnership..

In short, the negotiations for the conclusion of a new Economic, Political and Strategic Partnership Agreement between the ACP Group and the European Union are under way.

After the conclusion of the negotiations on the common base of the agreement on the 14th of December in Brussels, the two parties have now set their sights on the regional pillars of the post-Cotonou.

This stage of negotiations is essential and engages the responsibility of the regions namely Africa, the Caribbean and the Pacific.

Each of the three regions is in charge of negotiations on its pillar, and thus has the freedom to directly influence the course of negotiations at the level of the regional pillars. But, as Jean-Paul Sartre says in

“Existentialism is a Humanism (1996), “freedom and responsibility are an inseparable couple”. And Victor Hugo said well before him that “anything that increases freedom increases responsibility”.