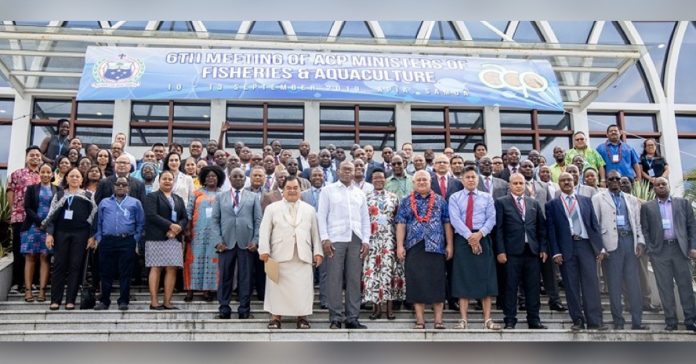 The Program is titled – “FISH4ACP Sustainable Development of Fisheries and Aquaculture Value Chains in ACP countries”.

A statement from the meeting says the program is aligned to the United Nations 2030 Agenda for Sustainable Development and seeks to boost productivity and competitiveness of fisheries and aquaculture value chains. It is funded through the European Development Fund (EDF), which is co-managed by the ACP and the European Commission.

The FISH4ACP Programme was developed following the adoption of the ACP Blue Growth Initiative launched during the 5th Ministerial Meeting in The Bahamas in 2017, where ministers pledged their commitment to the ACP Strategic Plan of Action, which was conceived to help countries to coordinate and cooperate on joint actions aimed at increasing the contribution of fisheries and aquaculture to social and economic development in ACP countries.

They highlighted the need for stronger partnerships, more funding opportunities, as well as South-South and Triangular Cooperation (SSTC) to catalyse progress.

The Fisheries and Aquaculture sector plays a crucial role to provide much-needed employment and export revenues for many ACP Member States.

As much as US$5.3 billion worth of fish exports from at least 65 ACP countries are annually traded globally. The Sector also plays an irreplaceable role in the food and nutritional security and the lifeline of many dependent communities particularly from ACP Small Island Developing States (SIDS).

Fish also continues to be one of the most-traded food commodities with more than 60 of the ACP States engaged in the export of fishery and aquaculture products. For some ACP States, fishery exports account for half the total value of their traded commodities.

The African, Caribbean and Pacific Group of States (ACP) is an organization created by the Georgetown Agreement in 1975. The ACP Group’s main goals centre around the sustainable development of its Member-States and their gradual integration into the global economy; coordination of the activities of the ACP Group in the framework of the implementation of the ACP-EC Partnership Agreements; consolidation of unity and solidarity among ACP states and establishing and consolidating peace and stability in a free and democratic society. For more information, visit our website at: www.acp.int.