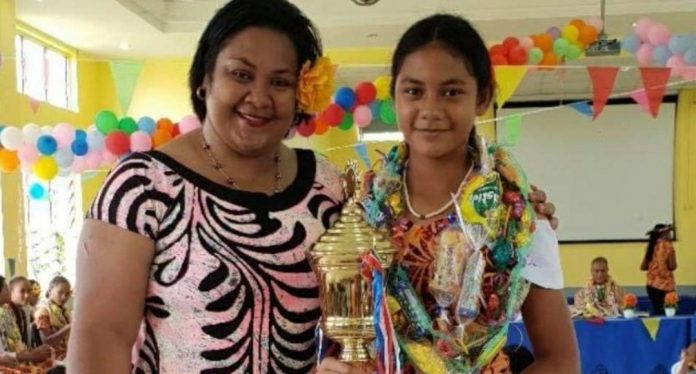 Lanuola Anoai Hansell has achieved her 2020 goal of becoming the dux of her primary school at Sapapalii, and continues her journey towards her career goal of one day, becoming a medical doctor.

In an interview with Samoa Global News the 13 year old says she aspires to become a doctor so she can set up a medical clinic on the Big Island of Savaii “and serve the people”.

Lanuola says her favorite subject is English and she did top English this year. But that’s not all. Lanuola also took the first prize for Maths, Samoan, Science, Social Science and HPE, giving her family lots of chances to come up and faaula her during prize giving.

Daughter of Glenn and Agalelei Hansell, Lanuola is the third of nine children and the family Iive in Salelologa, Savaii where her parents run a store. They attend the Worship Centre Church at Iva.

Lanuola is named after her late grandmother, Lanuola Loto, who had been a teacher at Sapapalii Primary School for over 20 years. She passed away in 2004 before Lanuola was born.

Mrs Agalelei Hansell is a SCOPA. She was one of five students to make the Samoa College entrance exam 1997, and entered Year 9 in 1998.

Agalelei says her daughter did not sit the recent Samoa College entrance exams because although it is a great school, they did not favor their young girl moving away from home at a such a young age to nofoaoga in Apia.

“Her father and I decided we would rather have her stay home and continue schooling here in Savaii until maybe Year 13, when she’s a bit older,” says her mother who adds that Savaii also has very good options for high school.

Next year Lanuola will be attending Don Bosco in Salelologa. She joins her two older brothers Emanuel who just finished Year 13 and Michael who will be in Year 12 next year.