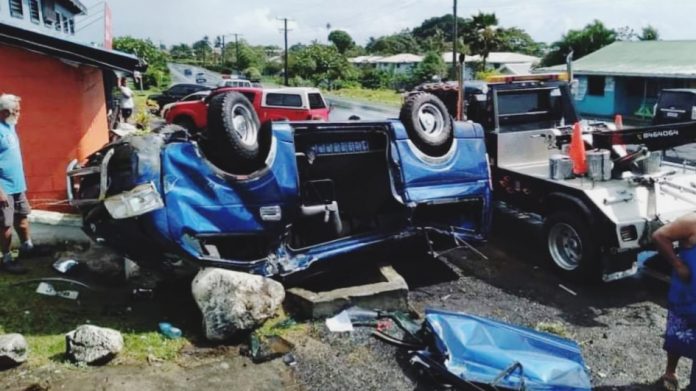 12 May 2022 Apia Samoa. A single car accident at Puipaa before 9am this morning saw the driver and a passenger escape with minor injuries and scratches.

Witnesses say the male driver looked to be in his early 20s. His passenger was a male around 16 or 17 years old.

Maina Vai of Radio Samoa was on site shortly after the accident and reports that the vehicle had lost control on the wet roads and swerved off the road.

It hit and uprooted part of a concrete slab on the side of the road.

It landed upside down infront of the Hope’s Kitchen restaurant at Puipaa.

The pair were able to walk away from the wreckage with minor scratches.

“The driver who looked to be in his early 20s and a male passenger maybe 16 or 17 years old were both taken by the FESA ambulance to the hospital for clearance..”

Deputy Police Commissioner Auapaau Logoitino Filipo has confirmed that the pair have been checked and discharged from Motootua National Hospital.