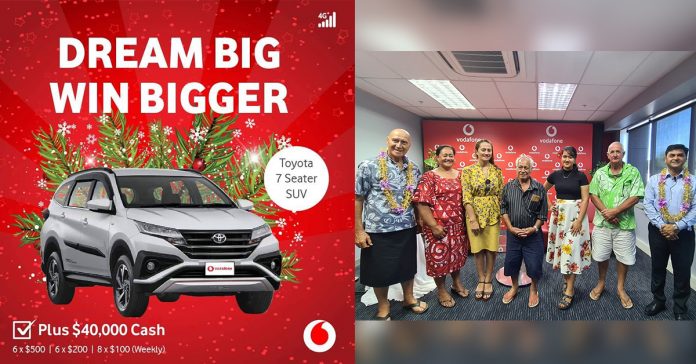 Vodafone Samoa has done it again! Vodafone’s Dream Big, Win Bigger promotion enabled many lucky families to win a share of $5,000 tala weekly for the duration of the promotional period and with one lucky family winning the grand prize; a brand new Toyota SUV 7 Seater Vehicle today.

The Dream Big, Win Bigger promotion valued at approximately $115,000 tala is the 4th edition of vehicles which Vodafone have given away to its customers. The first three being the Hyundai Grand i10’s and now the Toyota Rush, 7 Seater SUV perfect for the entire family.

How the game works for the 5 people vouching for the car:

The 5 x participants simply had to pick a key from 12 keys out of a box and in number order they would try their luck at opening the drivers side door. If the door opened with the participants lucky key which he/ she had picked; they would be the lucky participant to own a brand new Toyota Rush 7 Seater.

“Thank you Vodafone for putting together a wonderful program, thank you for having a clean sense of social consciousness to help Samoa be healthy and to help Samoa be communicative. Thank you for giving back to the community. Thank you for the opportunity to congratulations the lucky winner (when the time comes) and all the very best to you all participating.” Says Tuatagaloa Joe Annandale

Today, the 20th of January, 2021 was a lucky day for one of the five participants: Suilepa Aiulu from Tuanaimato (on the second round) was able to open the car door with the lucky key he selected. The crowd roared with excitement as he is now a proud owner of Vodafone’s Dream Big, Win Bigger – Toyota Rush 7 Seater SUV. The other 4 participants did not go home empty handed, they were gifted consolation prizes which included handsets and merchandise.

“Congratulations to the lucky winner, Mr Suilepa Aiulu! To  the other 4 participants, thank you for supporting Vodafone. This isn’t the end” Vodafone Samoa’s CEO Nofoasaefa Satish Sharama says.

“As we close the Dream Big, Win Bigger promotion I’d like to introduce Vodafone’s new campaign called the ‘More For All’ campaign, whereby for the first time in the history of Samoa Vodafone will give away 2 x vehicles – one (1) Toyota Rush SUV is dedicated to Savaii alone and one (1) Toyota Rush SUV is dedicated  for Manono, Apolima and Upolu Islands. This increases a high probability factor for the people of Savaii to win the next vehicle. “ he continued.

“I encourage the people of Samoa to switch to Samoa’s Largest Network and experience the benefits made available to you. Once you switch you stand a chance to win one of two new Toyota Rush SUV 7 Seater’s and $100,000 tala worth of cash – up to $5,000 tala cash weekly. This brings the new ‘More For All’ campaign to a total of $250,000 tala.” Vodafone’s CEO Nofoasaefa Satish Sharma Concluded

More For All Campaign introduces more ways to enter: