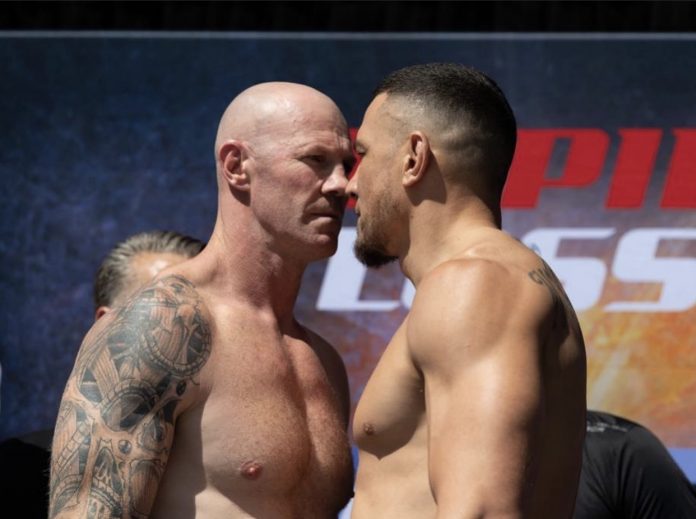 Wenesday 23 March 2022 Sydney. Tension leading up to the much anticipated Turf War clash between Rugby Union and NRL all-star Sonny Bill Williams and AFL great Barry Hall quickly spiked after the two had to be separated at the weigh-in yesterday.

At the stare down, Williams leaned in for some light head pushing, which ignited and aggressive push back by Hall. The two had to be separated by former Australian professional boxer Danny Green.

If you watch the weigh-in clips it wasn’t a head butt at all as reported by most leading news sites abroad. SBW stood in a stance ready to fight, when the pair were separated. They then regrouped, and continued with the ‘stare down’ photo shoot. 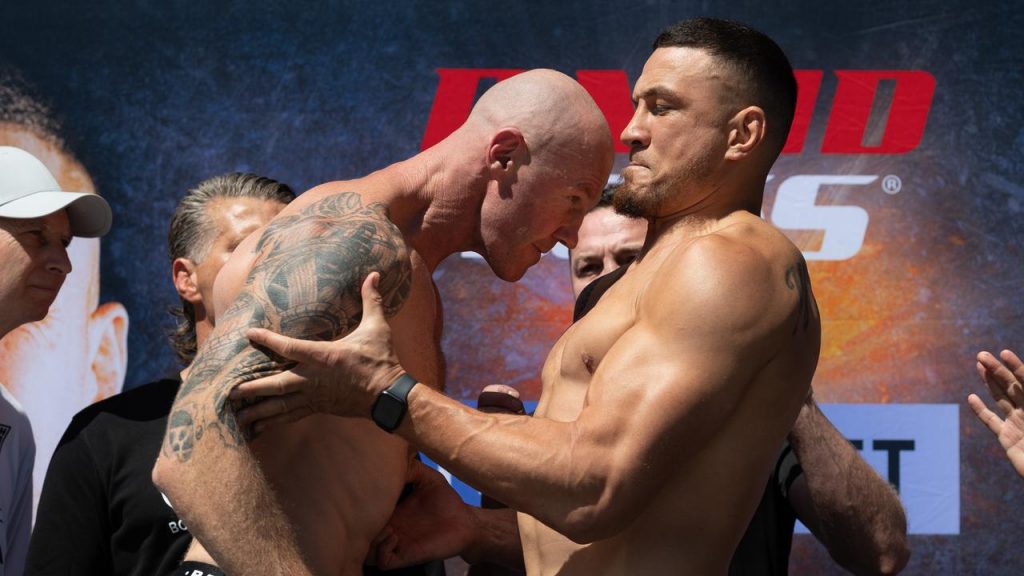 “Big Bad Barry” seems to have taken the underdog status in this upcoming fight having a record history of 0-0-1 (wins-loses-draws), but his corner is confident in his abilities in leaving Williams with an early round knock-out.

“At the press conference yesterday, there was an illustrious line-up (alongside Williams), all the names written down, when I had just two people with me,” Hall said on Fox Sports Australia.

Williams, in preparation for the fight, had traveled over to the UK for a six-week training camp with world heavyweight champion Tyson Fury and star boxer Joseph Parker where he said he “learnt a lot”, highlighting Tyson Furys mindset of “by any means necessary”.

With a boxing history of 8-0, SBW will have former WBO middleweight champion and renowned trainer Andy Lee in his corner for the fight.

“I’ve got a lot of respect for Barry, I know he’s put himself through the wringer this prep, I don’t know too much about his prep but I think he knows all about my prep,” Williams said at Monday’s press conference.

“I wish we were fighting tonight (last night) to tell you the truth but I’ve got no ill will towards Barry. I hope he goes home to his beautiful wife, beautiful children but I want to smash his face plain and simple..

“There’s no glory without putting yourself out there and I’m looking forward to getting out there and just being in the ring with Barry because I know we’re going to put on a good show,” said SBW.

What time is the Sonny Bill Williams vs Barry Hall fight?

The pair are set to meet on Wednesday, March 23 on Stan Event in what will be the beginning of a big week for Australian boxing with Tim Tszyu’s US debut against Terrell Gausha set to take place this weekend.

Where is the fight?

How to watch Williams vs Hall?

The fight will be the first on streaming service Stan Event for pay-per-view sporting events.

Unified lightweight world champion George Kambosos is set to commentate on the event, as will Aussie boxing greats Anthony Mundine and Danny Green.

To buy the fight, you’ll need an existing Stan account.

Sign up for a free 30-day Stan trial here.

From there, subscribers can purchase the event for $50 here.