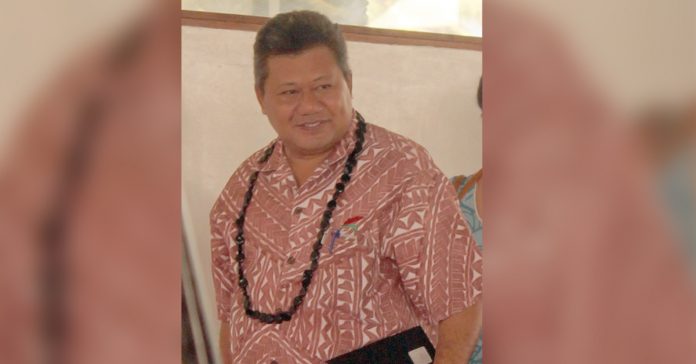 09 May 2019, Apia Samoa, Press Secretariat. Cabinet at its meeting yesterday afternoon considered and approved the appointment of Leausa Dr. Take Naseri to the position of the Chief Executive Officer and Director General of the Ministry of Health (MOH) for the next three (3) years.

Four applicants were interviewed for the position and panel, following a thorough assessment of each of the applicants’ merits, recommended Dr. Naseri to the post.

He was a student of Samoa College. Dr. Naseri is a registered practicing physician and has served Samoa in the Medical Profession for over 25 years.

Leausa had also served in American Samoa and in New Zealand in the fields of Anaesthesia and I.C.U, Internal Medicine and Infectious Diseases and Population Health.

Dr Naseri was the Consultant Specialist Physician, Public Health and Assistant Chief Executive Officer in 2010 with the Ministry of Health and was appointed as the CEO/Director General in 2014.

Among his many achievements entail establishing and developing Samoa’s National Disease Surveillance (N.D.S.) and International Health Regulations (I.H.R.) Division within the Ministry in 2012.

His population health background and distinguished clinical experience with his visionary approach, contributed to Samoa’s implementation of the W.H.O. N.C.D. Package of Essential Non-communicable disease interventions (P.E.N.), in the context of Samoa, now called the P.E.N. Fa’asamoa.

He was conferred the award of the “Best Proposal” at the Pacific Health Ministers Meeting’s 20th Anniversary Yanuca in Fiji 2014.

Under Dr Naseri’s guidance, the health sector in September 2017 was the first to develop a Disaster Risk Management (D.R.M.) Strategy for Samoa. The policy enabled the mainstreaming of climate change and health instruments across-sectors, and also assures the integrating of the I.H.R. 2005 and the Asia Pacific Strategy for Emergencies and Emerging Diseases III (APSED III); into all aspects of the strategy.

Of significance, as the Director General of Health, Dr. Naseri since mid-2017 has led the re-organization of the realigned health system; with emphasis on prevention, research and population health. This further strengthens emphasis on patient-focused and on population health, targeting the decentralizing of health resources to communities and grassroots’ levels.