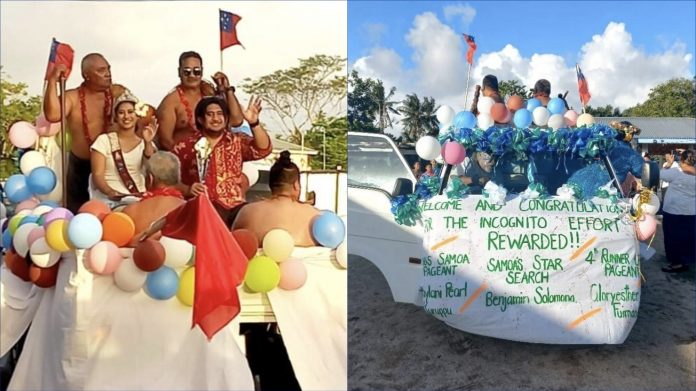 16 September, Moataa Apia Samoa. It was a double celebration for Moata’a village with a daughter being crowned Miss Samoa and a son being awarded the Star Search winner for 2022.

Haylani Pearl Kuruppu took out the Miss Samoa 2022 title amongst a tough competition of intellgent and beautiful young women, while Mr Benjamin Solomona was named Samoan Star Search Winner for 2022.

Moata’a village stopped the traffic to hold a special parade on Thursday evening to honour the achievements of the village tamafanau.

The parade went along the main road and then veered inland to the village under police escort.

Miss Samoa Haylani Pearl Kuruppu who represented the Melbourne community at the national event was born and attended primary school in Moataa before moving overseas with her parents.

Benjamin Solomona was born and raised and currently resides in Moataa.

The village high chiefs and elders congratulated the pair on their respective wins that has uplifted the village name and through their achievements, Moata’a village becomes known for great success.

At the EFKS hall the village congregated to exchange words of encouragement.

Asi Tuiataga Blakelock said the village are proud of all its youth who continue to achieve great things in Samoa and around the globe.

“We are very proud of you both. You have placed Moata’a on the map with your achievements,” he said.

Asi gave elderly advice to the 2022 Miss Samoa and Star Search winner to continue to forge ahead and remain alert and prepared for challenges during their reign.

In response Miss Kuruppu put it simply and eloquently.. “Our win, is your win Moata’a.”

Heading back to Samoa this week is another son of Moataa, Paul Scanlan who was awarded the Most Impactual Player of the recent LA 7s.