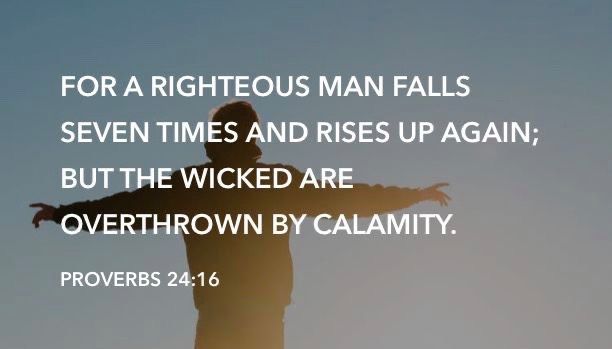 After all the challenges that the early church had faced, the Apostle Paul wrote in              2 Corinthians 4:9 that they were “STRUCK DOWN, BUT NOT DESTROYED.”

The APBE version says “WE ARE CAST DOWN, BUT WE ARE NOT DEFEATED.”

Being struck down after doing what’s right doesn’t mean you’ve been defeated. Others may think that you’re down and out, but you’ll only be defeated if you quit.

You don’t have to let a setback destroy you. Proverbs 24:16 says “THOUGH THE RIGHTEOUS FALL SEVEN TIMES, THEY RISE AGAIN.”

If you’ve recently faced a setback or have just been struck down, you have not been defeated or destroyed. Our God specialises in overcoming giants and moving mountains for those who believe.

So don’t give up! Setbacks don’t last forever, and those who don’t quit, will one day reap the rewards of their perseverance.

Others may strike you down but with God on your side, they can never defeat you.

Keep doing the good that you know to do and be patient. Your time will come.

Transform Your Mind and Live It All Out for God

Serve God with Passion and Gladness, and Finish 2022 Strong