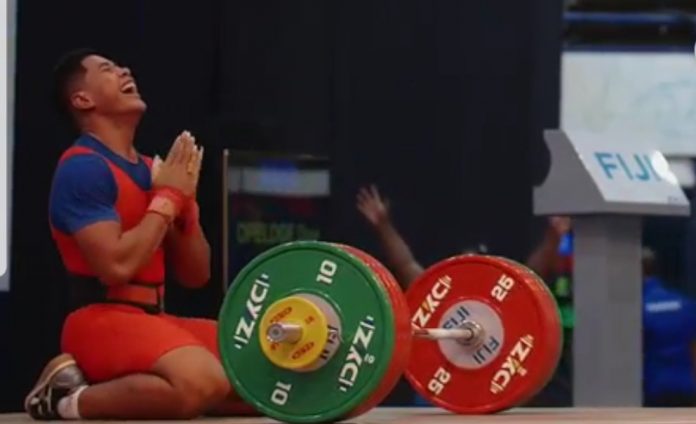 05 June 2019, Suva Fiji.  Don Opeloge has written himself into the history books as the first ever medal winner for Samoa at an International Weightlifting Federation (IWF) World Championship, securing none less than a Gold.

Speaking to Samoa Global News from Suva Fiji where the IWF Junior World Weightlifting Champions are being held this week, Samoa’s national coach Tuaopepe Asiata Jerry Wallwork says this is Samoa’ s first time to stamp its mark at the world level.

“Today the dream has come true. And it came with Gold,” says Tuaopepe.

“Don lifted 198kg to win the Clean n Jerk and then totaled 349 to win the overall total for Snatch n Jerk”.

Don Opeloge failed his first two snatches and trailed in sixth place at halfway, but made all his clean and jerks and won the 89 kilograms by making his last two lifts when everybody else had finished.

Mohammad Hosseini of Iran was second on 348kg, only a kilogram behind Opeloge, with Pole Bartolomej Adamus third.

Inspired by his famous weightlifting family – there are seven Opeloge’s on the IWF results database – Don Opeloge took up weighlifting in 2015, entering the international scene at the Youth Commonwealth Games hosted in Samoa on the same year, with a bronze medal. His hard work paid off at the 2018 Gold Coast Commonwealth games where he came up just short of a gold medal to secure a sliver medal for Samoa at only 18 years of age.

The man behind Samoa’s weightlifting success, Tuaopepe Asiata says that the Samoa National Weightlifting team has been preparing systematically over the past six months towards the World Champs as well as the upcoming Pacific Games in July.

“This is all part of the bigger picture, to strategically prepare and work towards the 2020 Tokyo Olympics,” said Tuaopepe.

“And we’d just like to acknowledge the people who got us here; the Government of Samoa, SASNOC and Samoa Water Authority;

“We have more lifters here with chances to win medals, tapuai mai.”

Fiji is the first Pacific nation to host an IWF World Championship and with no other Pacific Island with medal contenders, Opeloge’s gold has been dubbed not just for Samoa, but for Oceania.