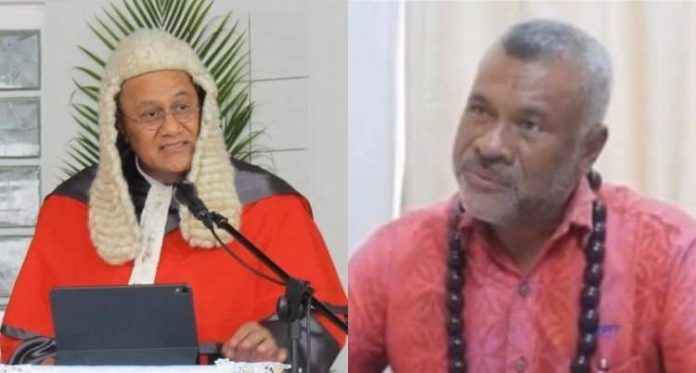 Leituala Dr. Ben Matalavea has spoken out to say Samoa is not safe with the decision to release the Chief Justice and others from quarantine after just 7 days, on the basis that they are fully vaccinated.

Dr Matalavea says it would be a tragedy if the coronavirus gets into Samoa if decisions are made on evidence not yet established.

“We have done so well for over a year now, sacrificing a lot. We cannot be complacent now, the pandemic is not over yet,” says the former Manager and Director of Clinical Services for NHS.

Dr Matalavea says those vaccinated may be safe, but Samoa is not protected.

“Being vaccinated protects but it does not mean the one who gets vaccinated will not carry the virus and transmit it to others..

“In that particular scenario you can then transmit it to somebody else and if that somebody else is not protected, then we have a problem,” says Leituala.

Currently the Clinical Director of Samoa’s National Kidney Foundation, it is Dr Matalavea’s opinion that in the absence of clear evidence, “we have to be on the safe side like we have been following so diligently for the past 14 months. He adds it  would be tragic to let the virus in if we start relaxing the protocols now.

However, at the NEOC media update held Saturday afternoon and streamed LIVE, Samoa’s Director General of Health gave his assurance that those who are vaccinated are fully immuned to the virus and not infectious.

Dr Leausa says this is not new, as Samoa has been allowing travellers from American Samoa who are fully vaccinated to enter without quarantine.

Leausa Dr. Naseris said the seven days of quarantine is taken as an extra precautionary measure.

“We observe them for seven days.., and in that time they are also tested,” added Leausa.. “both on arrival and before they are released into the community”.

Dr Naseri confirmed that apart from the Chief Justice of Samoa who was returning from medical checks in New Zealand, other passengers from as far as Germany and Tel Aviv (located on the Israeli Mediterranean coastline) have also been released upon presenting full vaccination certificates.

According to the Health Director, the decision to release passengers after seven days is done on a case-by-case basis, with close monitoring.

“We are mitigating the risks, and considering each case separately..”

“We look at the country they’re coming from.. and from there we decide.. so these decisions are not random.”

Dr Leausa also confirmed all incoming passengers not yet vaccinated are being given their first doses, and could then be considered for release after two weeks instead of three weeks.

Samoa has taken a highly precautionary approach to protect its borders from the deadly virus which has claimed over 3.1 million lives around the globe. Samoa was the first country to introduce strict pre-departure protocols for all incoming travellers, and impose a 2 week quarantine upon arrival.  When Samoa allowed the first repatriation flight in from Los Angeles, further precautionary measures were introduced to require blood tests and stretched that group to a 3 week quarantine period.

Last month a repatriation flight  for Samoan students set to depart Vanuatu was cancelled at the 11th hour when it was discovered flight crew did not meet Samoa’s pre-departure requirements. They had not been tested and therefore could not land in Samoa.

The relaxing of protocol to only 7 days quarantine is an unusual stance compared to Samoa’s diligent approach thus far.