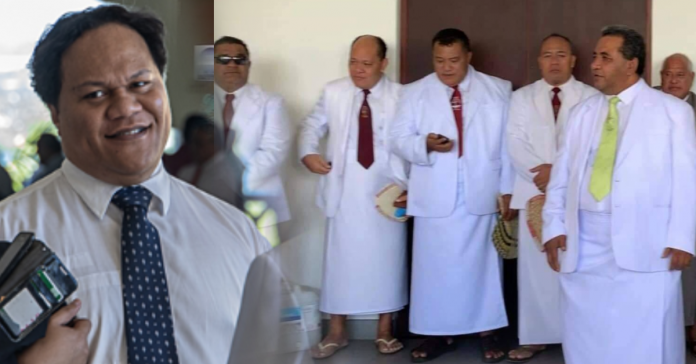 District Court Judge Leota Raymond Schuster has dismissed all charges against the first 20 Church Ministers of the Congregational Christian Church of Samoa (CCCS) after prosecution failed to provide sufficient evidence before the Court.

The Ministry for Revenue filed tax related charges against groups of CCCS or EFKS Church Ministers in Samoa following the Church’s public position to oppose the introduction of taxes for “faifeau” who in previous times were exempt from paying taxes.

Earlier this week defense Counsel for the EFKS Alex Su’a filed an application of “no case to answer” and argued that the evidence produced by prosecution were tenuous and vague as he submitted to the District Court that there was insufficient evidence to prove the charges against his clients.

In Court yesterday and again this morning, Judge Leota questioned Alesana Tumua of the Ministry for Revenue about the evidence presented to the Court such as proof that the defendants are Ministers of religion.

Leota said that just because the law says ‘Miinisters of Religion’, it does not make the defendants ministers of religion, unless prosecution presents evidence that identifies them as such.

“The legislation does not make the defendants ministers of religion,” he said.

Judge Leota explained that burden of proof is on prosecution to prove the defendants to be Ministers of Religion under the Act.

Outside Court this morning Alex Su’a told the media that the first lot of Church Ministers have been discharged and dismissed of the charges filed against them on the basis of lack of substantiated evidence adding that this is an issue of procedure rather than the merits of the case.

Sua said that there was a good chance that the charges against the second lot of faifeau would continue and be heard sometime in August.

Asked if this means the Church Ministers would now register to pay taxes according to the law, Su’a said that to a Samoan, what is given to their Church Minister is not their income, but their alofa (gifts of love).

“The argument goes a lot more towards the essence of our people as Samoan Christian, giving voluntarily to the faifeaus the donation as defined by case law when you give voluntarily; you don’t expect any material benefits from this,” said Su’a.

“But the tax law says income, so it would be an issue of a law.”