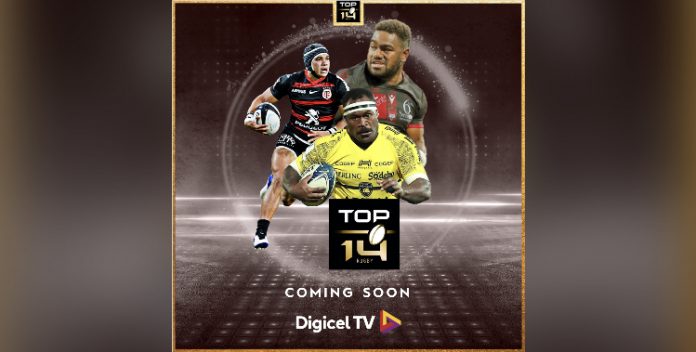 Digicel today announced the expansion of its premium rugby content with broadcast coverage of French rugby’s top flight competition – the Top 14 – on Digicel Tv and the PlayGo app.

Top 14 is widely regarded as the best and most competitive domestic rugby competition across Europe. Digicel TV and PlayGo app will show up to four matches every match-week starting from the opening round on Sunday, 5th September.

Digicel Samoa CEO, Fia’ailetoa Pepe Christian Fruean, said; “Digicel TV is delighted to bring even more world-class live rugby to its channels for sports fans. France’s Top 14 is renowned throughout the world as one of the most intense club rugby competitions showcasing the world’s best players including a host of Flying Samoans. Digicel TV viewers will now be able to tune-in weekly and watch a selection of four live matches plus all the final matches as teams battle it out for TOP 14 title and to lift the Brennus Shield.”

The star studded cast of a host of Samoans, Samoans and Tongans feature in the Top 14 with a host of international stars such as Cheslin Kolbe, Ngani Laumape, Lima Sopoaga andplenty more in the squads for the new season.

“Rugby continues to be a big priority for Digicel TV and we are committed to bring our customers the very best rugby action featuring the world rugby’s brightest stars every week live,” added Fruean.

The Top 14 starts on Sunday: 5 am Stade Francais play Racing 92 and at 8 am Toulon take on Montpellier. On Monday 6th September: 4.40 am Lyon meet Clermont Auvergne while La Rochelle face Toulouse at 8 am.

Customers are encouraged sign up or reconnect for free well in advance of these matches to avoid any disappointment.