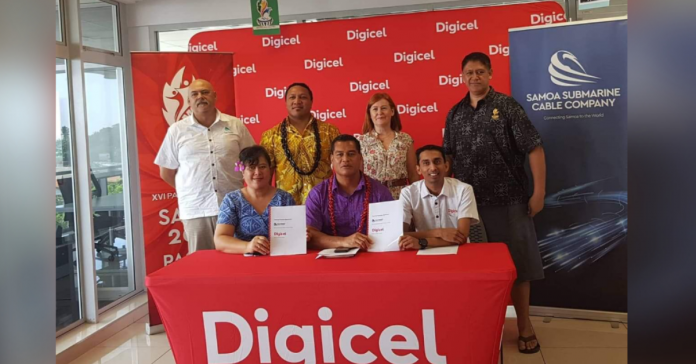 According to the Chief Executive Officer of Digicel Samoa Farid Mohammed the new deal provides incremental capacity on the Tui Samoa cable and it couldn’t have come at a better time with the hosting of the Pacific Games.

Digicel is the Official Sponsor of the Pacific Games 2019 where a record 5,000+ athletes from 24 counties will descend upon Samoa over the next 2 weeks.

Digicel’s support includes all broadcast and communications requirements and the additional capacity will not only ensure that Digicel delivers world class broadcast of the Games to the Pacific and Globally, but in future it can be used to support key enablers of economic growth in Samoa.

An IRU is a permanent contractual greement between the Samoa Submarine Cable Company as owners of the Tui Samoa cable and Digicel Samoa as a customer, to guarantees a certain amount of capacity over a long term period of 15 years.

CEO Farid Mohammad said, “Digicel continues to deliver on its promise to the Samoan government increased internet connectivity at a reduced cost;

“Since the launch of the Tui Samoa Cable last year, data price per GB has dropped by around 80% and usage per customer has seen a whooping increase, almost 6 times more over the same period last year.

“Customers can now access high speed internet on their smartphones at a click, they have the entertainment world on their device in their hand,” said Farid.

“It’s an exciting time for all Samoans, this is our moment to shine and as our athletes Go for Gold, our new partnership with the Samoa Submarine Cable Company will showcase how we are on par with the rest of the world when it comes to broadband internet connectivity.”

“The Tui Samoa is the first Pacific Cable to have signed an IRU so this is a great milestone for the Samoa Submarine Cable Company and positive outcome of the strategy implemented by the Board.

“Today we are here to mark a very big first, it’s huge in a sense that the government vision has been achieved;

“The ceremony this morning marks the first ever IRU in the Pacific in terms of connectivity and its been the government’s vision to invest in Tui Samoa through the Samoa Submarine Cable Company,” he said.

“The Pacific Games broadcast is an important aspect of our commitment to delivering the coverage of the Games to not just the other Pacific Islands that are participating but also to the rest of the world. I am delighted that with the increased capacity we will be providing high quality broadcast to all our partners,” said the Samoa MCIT Minister.