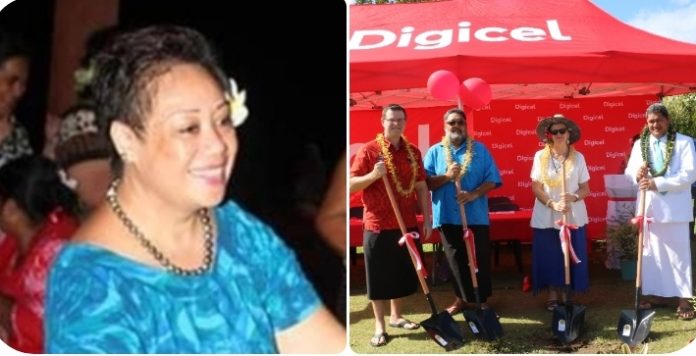 The late La’eimanu Oketevi Tanuvasa-Savea who played a significant role and was instrumental in lobbying for the establishment of Digicel in Samoa and the advancement of  Samoa’s ICT Sector will be remembered by younger generations with the establishment of the Samoa Primary School computer lab in her honor.

Digicel Samoa joined Laeimau’s husband Samuel Savea at the ground breaking ceremony earlier this week to establish the new building, which will also double as a learning center for students at Samoa Primary School in Vailele.

Laeimau’s only daughter Luisa is a former student of Samoa Primary School and the project is a gift from her mother and their family for the school.

The former Chief Executive Officer of Computer Services Limited and Board Director of Digicel Samoa Ltd lost her battle with cancer and passed away in December 2018.

Digicel Samoa CEO Mark Witthuhn said, “We enable this opportunity to honor the late La’eimau and pay homage to her vision of seeing Information Technology as a gateway to Samoa’s prosperity”.

“The development of a computer lab and a learning center at Samoa Primary School gives our students an open forum to learn and use technology as a helpful tool, access the internet which opens doors to information and gives every student an invaluable advantage to better education”, added Mr Witthuhn.

Mr Witthuhn concludes, “The key purpose of this project is to continue La’eimau’s legacy and passion for ICT. Furthermore, for young people to develop an interest in ICT as a field of study or career path;

The Late La’eimau was an innovative and forward thinking individual, this project is attributed to her.”

Work on the new building kicks off next week with an expected completion time of six weeks.

ABOUT DIGICEL GROUP
Digicel Group is a total communications and entertainment provider with operations in 31 markets throughout the Caribbean, Central America and Asia Pacific. Digicel also runs a host of community-based initiatives across its markets, including Digicel Foundations in Haiti, Jamaica, Papua New Guinea and Trinidad and Tobago which focus on educational, cultural and social development programs.
Visit www.digicelgroup.com for more information.