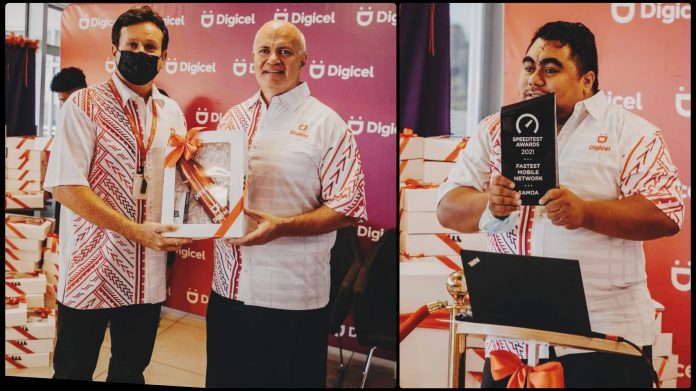 Digicel was announced to have been awarded the 2021 Ookla Speedtest Award back in March and this week, Digicel Samoa are celebrating its independently verified status as the Fastest Mobile Network and Fastest Internet Provider.

The company behind the speed test is Ookla, the global leader in broadband and mobile network testing applications, data and analysis. The Ookla Speedtest Awards are an elite designation reserved for fixed and mobile providers in a market. Based on consumer-initiated tests and background scans from Speedtest applications, Speedtest Awards represent real-world network performance and the Internet speeds and coverage provided to customers.

The announcement by the Digicel Samoa C.E.O. Seiuli Deepak Khanna came through a video link on Wednesday morning before management and staff of the company, as part of a press conference the company convened at its headquarters at the SNPF Plaza. Also present was Chief Operations Officer, Harpreet Bhulla and the Chief Technical Officer, Derrick Rasmussen.

According to Digicel Pacific CEO Ms. Shally Jannif, the network is delighted to have achieved the Fastest Internet Provider Ookla Award. “We all work very hard at Digicel to provide our customers with the best service possible.”

“We have made significant investments in our networks – which forms the backbone of our success, and are focused on continuous improvement,” said Ms Jannif. “Ookla judges the best of the best networks all over the world, so this independent verification from them about the strength and reliability of our network in Samoa and Tonga is a testament to all the work we have put in and our commitment to our customers.”

“These awards remind us that the work we do has a big impact on the people we serve and our job is to do all we can to delight them and be an integral part of their digital lives every day,” added Jannif.

Ookla CEO, Doug Suttles, said; “Speedtest Awards, presented by Ookla, are reserved for an elite delegation of network operators that have delivered exceptional internet performance and coverage within a market. It is our pleasure to present Digicel with the awards for Fastest Mobile Network in Samoa…This recognition is testament to their exceptional performance in Q3-Q4 2021 based on Ookla’s rigorous analysis of consumer-initiated tests taken with Speedtest.”

Ookla compared 5,590 user-initiated tests taken on the Speedtest iOS and Android mobile apps from both major mobile carriers in Samoa during the award period to determine who showed the fastest mobile network speeds, when comparing both networks numbers, Digicel showed better download and upload speeds.