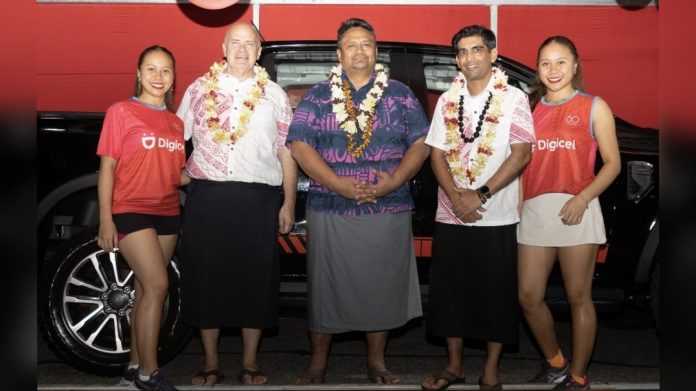 In celebration of Samoa’s 60th Independence, and the re-opening of Samoa’s international borders, Digicel has launched not one but two initiatives under the campaign slogan, Freedom to Be”

The campaign takes inspiration from Samoa’s 60th Year of Independence coupled with the re-opening of international borders.

Digicel acknowledges that Samoa has remained resilient and endured many challenges during this period.

The company aims to inspire customers and celebrate the two big occasions of the country’s independence and the freedom to travel to connect with loved ones, and most of all travel freely without any restrictions.

The two initiatives launched this week are part of that celebration.

Launching Digicel’s sports apparel for the promotion of sports in the country. Under this initiative, Digicel invites budding sports athletes and clubs to sign up and take its top-of-the-line sports apparel. This sports apparel is cutting-edge in design and fabric that makes it best suited for enhancing sports performance while keeping the athletes cool and comfortable in Samoan weather. Teams and athletes can reach out to Digicel on its social media channels to request for the evaluation and selection of the merchandise.

The second part of the initiative is a massive consumer promotion. Under this promotion, Digicel is offering its customers a chance to win a wide range of goodies that range from the 2023 Ford Ranger XLT and weekly air flight tickets to Auckland, NZ. In addition to this, customers also have the chance to win Smart TVs, Smartphones, BBQ sets, data bundles and much more.

Digicel Samoa Chief Executive Officer, Seiuli Deepak Khanna, said these promotions are Digicel’s way of connecting with the sporting community and empowering them to pursue their passion and excel in sporting arenas domestically as well as around the globe.

“The 60th year of Independence this year calls for a large celebration of many things such as the festivities around the country, family reunions which were postponed for two and a half years and students travelling overseas to pursue their academic dreams,” added Seiuli.  “The hero prize is the 2023 Ford Ranger XLT which we have customised and perfectly fits the bill of the most aspirational vehicle in the country.”