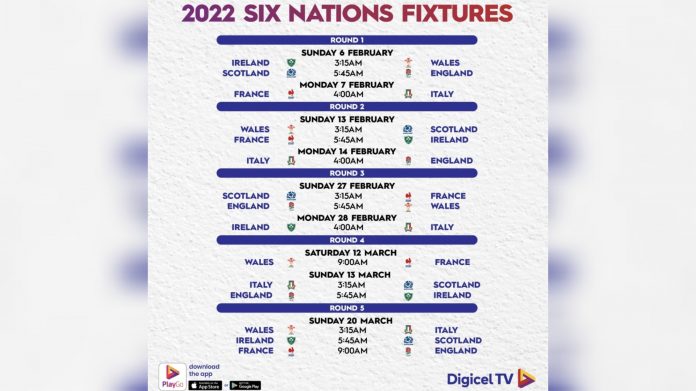 Apia, Samoa, Tuesday, 1st February 2022 Coverage of all 15 matches of the 2022 Six Nations Rugby Championship will be live and exclusive on Digicel TV and the PlayGo app, Digicel has today announced. That is in addition to all 91 matches from Super Rugby Pacific also aired live on both media platforms.

Since 1882, the Six Nations Rugby tournament has been taking place, attracting millions of sports followers and fans from around the globe.

The competition features England, France, Ireland, and Wales – all Tier 1 sides in the Top 8 of World Rugby rankings. Italy is the sixth side, currently ranked 14th on WR standing. The six nations would be competing for the cup and be crowned as champions of the 23rd Six Nations edition.

The competition kicks off this Sunday (Samoa Time) February 6th with the final round on Sunday, March 20th.

Digicel Samoa CEO, Seiuli Deepak Khanna, said; “We are thrilled to add the prestigious Six Nations Rugby Championship to our growing live rugby and overall premium live sports portfolio. These 15 international tests between some of the highest-ranking teams in World Rugby again solidifies our position as the Home of Rugby and represents great value for our customers.”

Six Nations Championship is bound to be full of drama after last year’s last-minute French win over the Welsh, which meant that the winner of the Championship was only revealed after the final match was played.

“This is a delight for rugby and sports fans – Digicel TV and PlayGo app subscribers will now be able to enjoy the best of the club and international rugby from both southern and northern hemispheres. Our subscribers will receive fantastic value for the next six months from the best rugby competitions, all in one place – live and exclusive,” commented Khanna.

The matches of round 2 would be starting after a 6 days break; the first match would be between Wales and Scotland on 13th February 2022 in Millennium Stadium, Cardiff. Then on the same day, France would be up against Ireland in Stade de France, Saint-Denis. Italy and England would be playing on 14th February 2022, which would be the last game of Round 2.

On 12th March, Wales would be up against France and Italy against Scotland on 13th March 2022. The last game of round 4 will also be played on 13th March between England and Ireland.

In the all-important final round, every team would be playing their last match of the group stages. Wales would be taking on Italy; Ireland would be up against Scotland, and France would be competing with England. All matches of Round 5 will be played on 20th March 2022.