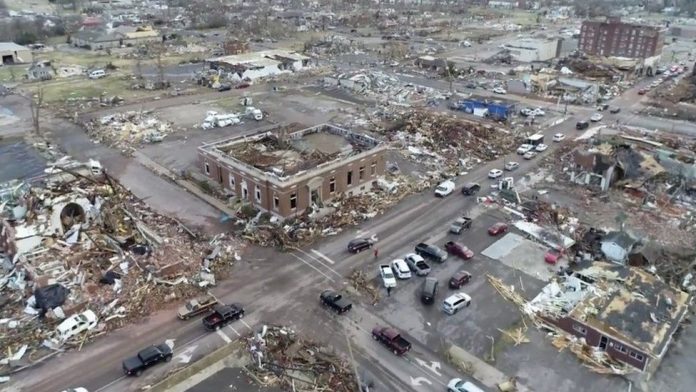 More than 50 tornadoes were reported across eight states late Friday and early Saturday, killing dozens of people and leaving a trail of devastation.

The severe weather caused the collapse of an occupied candle factory in Kentucky, an Amazon warehouse in western Illinois and a nursing home in Arkansas, killing people at each site and leaving responders scrambling to rescue survivors.

Dozens of people are still missing and entire towns were destroyed by about 30 tornadoes on Friday.

President Biden has declared a state of emergency in Kentucky, the worst-affected state.

“The level of devastation is unlike anything I have ever seen,” said Kentucky Gov. Andy Beshear.

At least 80 people have died in the state, including dozens in a candle factory, and the death toll is expected to rise above 100.

Kentucky Lieutenant Governor Jacqueline Coleman told the BBC the death toll was continuing to rise “with every hour”.

“All of these numbers continue to unfold…,” she said. “Our emergency response teams are still surveying the damage and knocking on doors and reaching out to folks trying to make contact to see who’s alive.”

Local congressman James Comer, working with rescuers in the ruined town of Mayfield, said the tornado there was the widest ever seen.

“It’s the most devastating storm damage I’ve seen in my entire life. We’ve had tornadoes that have been the same length as this tornado but we’ve never had one with the width of this tornado,” he said.

Forty people have been rescued from the collapsed candle factory in Mayfield but 60 more remain missing and Kentucky Governor Andy Beshear, who has visited the scene, said it was unlikely there were more survivors.

He said no-one had been found alive since Saturday.

“There’s at least 15ft of metal with cars on top of it, barrels of corrosive chemicals that are there. It’ll be a miracle if anybody else is found alive in it,” he said.

One candle factory employee made a desperate plea for help on Facebook from under the wreckage as co-workers could be heard moaning in the background.

“We are trapped, please, y’all, get us some help,” said Kyanna Parsons-Perez – who was later rescued – in the broadcast played on CNN.

Ivy Williams, whose wife was working a night shift at the factory, was speaking to her on the phone when the call cut out, he told the Washington Post. He said he had not heard from her since.

“I need people to help me find my wife, and be honest with me, and let me know as soon as possible,” he told the newspaper, in tears as he waited outside a counselling center.

“Out of nowhere the sirens went off and then not long after that our ears popped. I mean it was like the pressure dropped. And then it felt like our house was about to just be gone, get carried off,” he said.

“It looks like a bomb went off. I don’t know how anybody could’ve lived. I feel bad for anybody that didn’t make it or people who got stuck. I’m sure it was terrifying.”

There is no water and electricity due to downed power lines and the army have been brought in to guard the entrance to the candle factory where a huge rescue operation is still taking place.

Tornadoes also collapsed an Amazon warehouse in Edwardsville, Illinois, killing six people. Police said at least 45 people had got out safely but that there was little hope of finding more survivors.

The intensity of the latest storms has encouraged speculation about how much they have been affected by climate change, though President Biden said the exact impact was not yet clear.

“We all know everything is more intense when the climate is warming, everything,” he said.

The longest a tornado has traveled along the ground in the US was a 219-mile storm in Missouri in March 1925 that claimed 695 lives.

However, such major events outside of the spring and summer months are extremely rare.