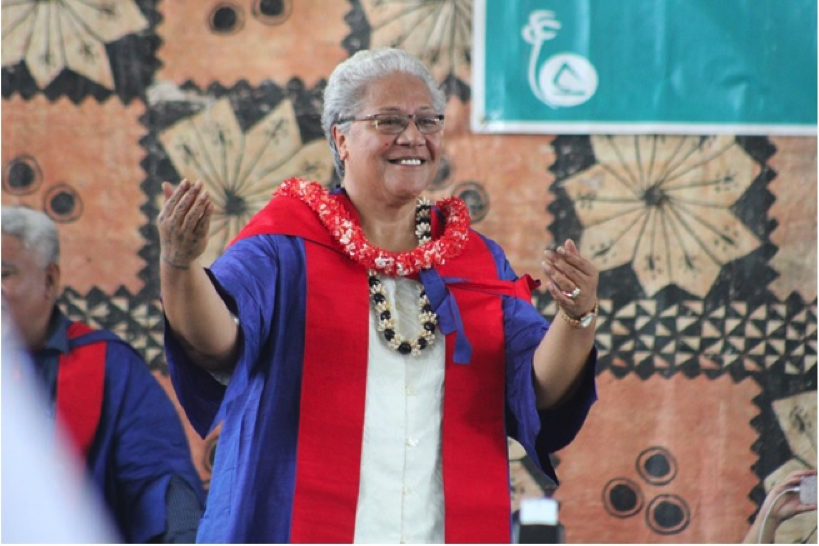 (GOVT. PRESS SECRETARIAT): Deputy Prime Minister Fiame Naomi Mataafa public service to Samoa thundered into the limelight for all the right reasons last Friday during the University of the South Pacific graduation ceremonies.

As a former USP Pro-Chancellor and Chair of the Council, Fame’s involvement in Politics and as a Member of Parliament in Samoa since 1985 “significantly reflects her passion to serve both Samoa and the Pacific.”

In nominating the Deputy Prime Minister, the USP also noted that, “As a woman who is both a national and regional leader at a time and in a region where women are still striving to have a voice in the socio economic and political spheres, Hon Mataafa is an inspiration.

“Her public service intellect and her tireless commitment to championing the cause of environment conservation at the national regional and international level is commendable. She is stellar role model for other women in the Pacific region.”

Fiame was conferred the Honorary Degree of Doctor of Letter (D.Litt) during the USP’s graduation ceremony at the school of Agriculture at Alafua. 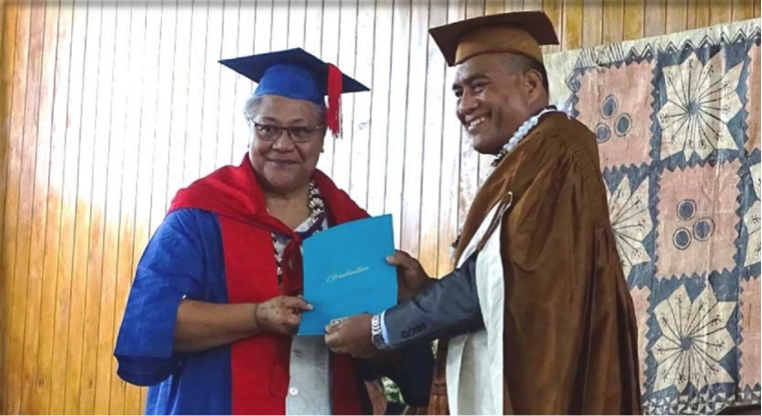 The Deputy Prime Minister is one of the 5 outstanding recipients nominated and endorsed by University’s Council based on their outstanding service to the Pacific.

The following is her nomination credentials prepared by the USP;

Hon. Fiame Naomi Mataafa high chief and currently the Deputy Prime Minister of Samoa. She was born in Samoa 1957 and began her education in Samoa and later moved to New Zealand to undertake her secondary and tertiary education

Hon. Mataafa has been involved in politics in Samoa for more than 30 years, beginning as a Member of Parliament in 1985.

She is one of the longest standing Member of Parliament in Samoa and the first female member of Cabinet.

She has been a Cabinet Minister since 1991 serving as;

On the national level, Hon. Mataafa is a keen advocate for women’s development especially in the area of women in politics and a strong advocate for women’s equality. She has been as longstanding member and is the current President of the Samoa National Council of Women.

The Samoa Observer had also stated that,

“…….as a voice of intelligence, reason and cooperation Hon. Mataafa has navigated the often stormy waters of the Human Rights Protection Party (H.R.P.P) whilst earning the respect from the Prime Minister and the majority of the party members.

Her drive for the development of Samoa, her knowledge, honesty and ability to stay clear of party factions have stood her in good stead throughout her long career in politics.

In addition to that her leadership to achieving the best objectives at crucial times whilst still observing the Faa-Samoa and considering differing points of view has evoked admiration from those who have works with her.”

Hon. Mataafa has also directly and significantly contributed to education in Samoa as she was previously Samoa’s Minister for Education for 15 years, a period that witnessed major reforms in Samoa’s education sector, notably, the installation of national single stream curriculum with the consequential upgrading of 21 Junior Secondary District Schools to full Colleges, introduction of the Samoan Language as a formal language of instruction together with English and the building of the Papa I Galagala campus for the National University of Samoa under which the Post –Secondary sector was amalgamated.

As the incumbent Minister for Natural Resources and Environment, Hon. Mataafa is very instrumental in the area of environmental protection at the global, regional and national sphere.

In April 2017, she hosted a regional ministerial meeting on CITES which regulates international trade of wildlife for conservation purposes. Many of these endangered species such as marine turtles, sharks, dolphins, and corals are found in the Pacific region. AS host of the regional meeting, she influenced other Pacific countries for active regional participation and representing in CITES.

In the following month of May 2017, she travelled to Tonga to attend the Whales in a Changing Ocean conference. At this meeting Hon. Mataafa championed the cause of the Pacific Region in the area of ocean conservation by playing a key role to influence 13 other Pacific Ministers to agree to a Regional Declaration for the establishment of national whale sanctuaries that will ensure the continued and effective conservation of the endangered humpback whale in the Pacific.

Hon. Fiame Mataafa’s contribution to environment and climate change issues in Samoa and the region have been through the establishment of major national and international agreements and partnerships and toward securing funding to address these issues.

A significant testament to this was Samoas participation with the 182 other countries from around the world in the 6th Global Environment Facility (GEF) Assembly meeting in Vietnam. The GEF Assembly meeting was to secure resourcing of activities at national level mainly for climate change adaptation and mitigation, biodiversity conservation, land degradation, chemicals and waste, and international waters.

Her other notable contributions to the region included being the Pro –Chancellor and Chair of the USP Council from 2006 to 2012. She has also been a long standing member of the Council as Minister for Education, Samoa from 1991 to 2006 so has seen the growth of the university and had been part of the many changes at the USP.

As Pro Chancellor, Hon. Fiame was instrumental in obtaining a major grant from the Government of New Zealand for the Governance and Management Enhancement Support Project (GMES) which reviewed the University’s HR, Finance and ITS processes and systems and led to major improvements in the delivery of these services. Fiame’s associations with the USP did not only start from there.

It began with her mother – the late Masiofo Fetauimalemau Mataafa who served as the first Pro Chancellor of the University from 1970 to 1976.

As the Pro Chancellor at the time, she was on hand to receive the Royal Charter from Her Majesty Queen Elizabeth the second at the Laucala Campus.

Hon. Fiame Mataafa’s involvement in Politics and as a Member of Parliament in Samoa since 1985 significantly reflects her passion to serve both Samoa and the Pacific. As a woman who is both a national and regional leader at a time and in a region where women are still striving to have a voice in the socio economic and political spheres, Hon Mataafa is an inspiration. Her public service intellect and her tireless commitment to championing the cause of environment conservation at the national regional and international level is commendable. She is stellar role model for other women in the Pacific region.