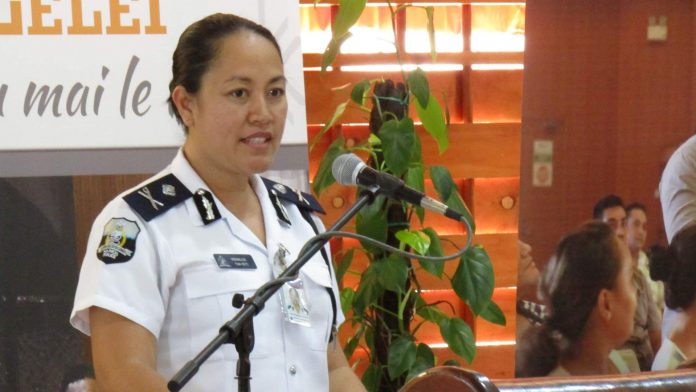 Papalii spoke to the 280 women who today work in the Samoa Police Service – a number that has more than doubled in the past 5 years since Police Commissioner Su’a Fuiavailiili Egon Keil had taken over in 2016.

The first woman to become a Deputy Commissioner, Papalii Monalisa spoke to the theme…’Choose to Challenge’ and told her colleagues that the service is a calling that comes with many challenges.

She reflected on how she had struggled to find a job when she returned from New Zealand with a degree, and there were not many jobs available within government at the time.

After a month without a job, Papalii says she was one of five people who had graduated from overseas, who then took the road less travelled, and applied to the Ministry of Police Institutional Strengthning Project (ISP).

“At that time, no returning scholarship student graduated from overseas would ever want to apply to the Ministry of Police”.

Papalii Monalisa Keti said when she started at the Ministry of Police in 2004, there was a slight increase in pay to regonise those who had a degree.

This would be the first challenge, as it did not sit well with her leaders and supervisors…

“They did not like this, and would call us cheeky, disrespectful and high minded..”

She said she was thrown in the deep end and placed in difficult roles without support in the hope that she would give us.

“They made me direct traffic on the road, and then watched to see if I would survive under pressure..” she recalls.

“Instead I learnt a lot from the experiences..”

She also said it was not just the men, but also other women in the police service who were unsupportive of them, and smiles to add that some of those colleagues are still in the service today.

“They would question our capabilities especially us new female cops.”

This motivated Papalii to apply to a detective course being offered at the time.

“We could hear the perception about us returning scholars… that the only thing we were good for was to sit in the air conditioned rooms”, said Papalii.

She was ranked third out of the 21 candidates, and only 15 who passed.

She said there are challenges that remain even now…

“But you must know how to navigate those challenges.. like I said in the beginning…know where you have been, know where you are, and also know when you are going too far.”

Papalii reminded her female colleagues to be aware of when they may be pushing the boundaries too much and to make sure they are not playing the gender card as an excuse for not doing the work.

Commissioner Su’a Fuiavailili Egon Keil in his speech acknowledged womens contribution not only in the Samoa Police and Prisons but in every workforce, family and community.

“I take great pride as being one of many advocates for womens rights and regonising gender equality in our workforce,.. there is no doubt women face ongoing dicrimination in many work environments on a daily basis, across all Ministries there is no exception.”

He also acknowledged the many men in the service who have become very supportive of the movement to embrace gender equality in the Ministry.

Fuiavailili said when he first become a Police Commissioner in 2015, there were only 136 women amongst the 650 staff members.

“And Im happy to say that that number is now increased to 280 women…what a great achievement!”

Women now hold key positions in the Ministry of Police – one Deputy Commissioner, one Assistant Commissioner, two Directors, one CEO of Legal, one Inspector OIC for CID, one Inspector OIC of Traffic, one Supreintendent OIC of TONS, one Superintendent OIC of Records. There are two women in Tactical Operation Section (TOS), and three at Nafanua II Maritime.