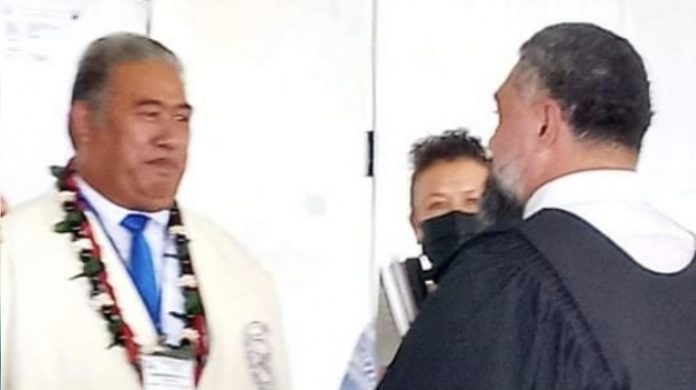 The case of an Australian-based radio announcer accused of defamation against the Prime Minister and Cabinet has been adjourned to this week, the 25th of August to hear an application to dismiss all charges.

Judge Fepuleai Raymond Schuster was not impressed when prosecutor Jason Tuala revealed that his witnesses were on overseas travel and could not appear in Court.

Judge Fepuleai asked Prosecution why they had agreed to the 19 August hearing date if they knew the witnesses would be overseas.

Tiumalumatua Maifea Fetu is alleged to have spoken out against Prime Minister Fiame Naomi Mataafa and other members of Cabinet on the Samoa Toe Faaolaola radio show broadcasted in Australia.

A charge of defamation under s117(A) of Samoa’s Criminal Act was filed by Police following a complaint by Faatuatua i Le Atua ua Tasi (FAST) party secretary Va’aaoao Salu Alofipo.

Tiumalumatua was charged when he travelled to Samoa in July to attend the Methodist Church Annual Conference. Holding a high deaconship position in the Church, the accused publicly apologised to the Church during the conference for the negative publicity his arrest had caused.

Tiumalumatua is being represented in Court by former Electoral Commissioner, Faimalomatumua Matthew Lemisio.

When Prosecution witnesses failed to attend the scheduled hearing date, Faimalomatumua put forth an application to quash the defamation charge against his client.

That application is now set to be heard this Thursday, 25 August.

The radio announcer is being charged under the same law that saw Malele Paulo aka King Faipopo convicted and sentenced to 7 weeks jail time for defamation against former Prime Minister, Tuilaepa.

A citizen of New Zealand, King Faipopo had made defamatory comments against Tuilaepa on his Facebook page in 2018. He was arrested and charged by police when he visited Samoa in 2019 to attend his mother’s funeral.

Police Commissioner at the time, Su’a Egon Keil, told media that Samoa has laws to protect the public from false and defamatory statements and cyber bullying.

“The damage caused to members of the community is a matter that these laws are designed to address,” Commissioner Keil had said at the time.