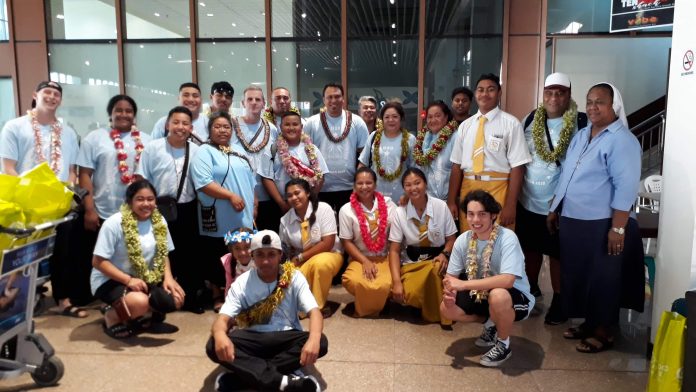 De La Salle is a Catholic school for boys that has produced many players from both codes of rugby including former All Blacks Sir John Kirwan and Isaia Toeava as well as former Kiwi and Toa Samoa Jeff Lima.

Many Manu Samoa players such as Junior Polu, Johnny Faamatuainu, and Alfie Toala are notable alumni of De La Salle and two players currently at the Rugby World Cup, Piula Faasalele of Samoa and Timothy Lafaele playing for Japan both hail from De La Salle.

“We may have more Samoan boys at De La Salle than they have at Samoa College!” says Mr English with a smile.

Sister Noella Tialavea is a teacher traveling with the group and she says one of the main goals of their two week visit is to gain knowledge and a deeper ununderstanding of the Samoan culture.

“It is really important for our young Samoans living in New Zealand to understand their cultural environment and heritage”.

“Another reason for our trip across is to build our relationship and partnership with St Paul VI College”.

De La Salle will spend 2 weeks at St Paul VI school working alongside the teachers and students to immerse themselves in how things are done here in Samoa.

The visiting group will also be clearing a container  of supplies that De La Salle has shipped over to assist with St Paul VI College.