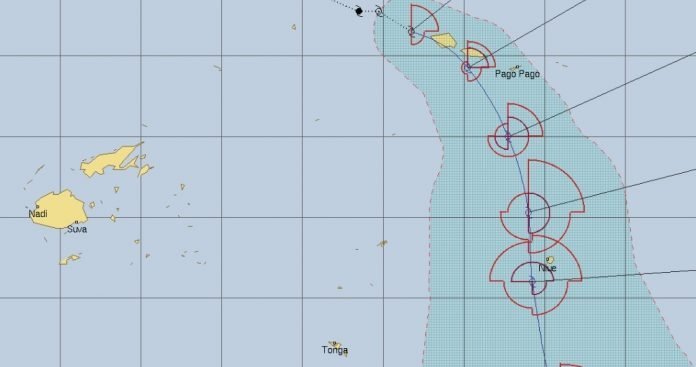 Cyclone Wasi is the second named tropical cyclone to form near Samoa this past week. Although there are slight differences in reports from various weather watchers, they all agree that TC Wasi is intesifying, and tracking away from the Samoa Islands including American Samoa.

Issued by Samoa Met Office at 5am Sunday 23rd Feb:

Tropical Cyclone WASI Category 1 with wind speeds of up to 83km/h at its centre was located  at about 62 km South South East of Taga and 79 km South West of Apia at 4am this morning.

The system is moving East South East at a speed of 10km/h.

If TC Wasi continues at this projected track it will continue to move away from Samoa, relocating at about 121 km South of Tafitoala or 147 km South of Apia at 11 am this morning.

Messy and Difficult to Track

This is the third tropical storm to form in a week in the region and the second named tropical cyclone. WeatherWatch NZ says computer guidance for Wasi is messy and not in agreement, making this cyclone potentially harder to accurately forecast than Vicky.

What are the various Weather Watchers Saying

WeatherWatch.co.nz head forecaster Philip Duncan says the energy in the area has been spread out, with each system has been feeding off the other.

“This is why we’re seeing a series of storms but nothing yet too major, however Wasi may be slightly better organised and could deepen into a Category 2 cyclone“.

Mentime the Fiji MetService says it may even get to a Category 3 briefly.

The US Joint Typhoon Weather Center (JTWC) in Hawaii who most accurately picked Vicky’s short lived progress for Friday/Saturday, now says Wasi has the better chance at becoming a bigger tropical cyclone, but likely out at sea and only briefly.

“However it’s still a serious situation for parts of Samoa and then Niue. Gale force winds, possibly severe, torrential rain, thunderstorms – along with dangerous seas and beaches” – JTWC.

With Wasi, JTWC and Fiji Met seem to be more in agreement over Wasi than they were for Vicky.

Periods of rain with heavy falls and few thunderstorms.

The next severe weather information will be issued by Samoa Met Office at 11am today, Sunday 23rd Feb.