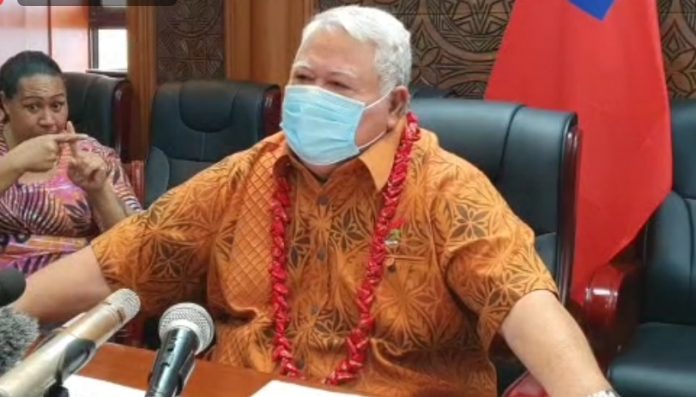 Addressing the media at a press conference this afternoon, Tuilaepa confirmed that the results from laboratory tests in New Zealand were “exactly the same as the local results”.

At this afternoon’s press conference, Tuilaepa acknowledged the country’s anticipation of the test results from New Zealand, and regretted to advise that the NZ lab results had only been able to verify the results from Samoa – i.e. that the positive result was positive, and the negative result was negative.

Tuilaepa sympathised with the nation’s eager anticipation of confirmed results, and said blood samples would now be drawn and taken to the special laboratory in Wellington for more conclusive results.

“His blood will be taken to New Zealand this Friday and hopefully we will get the results on the following Monday,” Tuilaepa said.

Tuilaepa said the sailor’s swabs were also tested by the Scientific Research Organisation of Samoa (SROS) and the outcome was the same, ie: positive test verified as positive while the negative test was verified as negative.

Samoa’s COVID-19 response processes were an “All Systems Go” from last Wednesday night when the young sailor, who had arrived 4 days earlier on a repatriation flight, returned a positive test during a routine testing of over 270 passengers in quarantine.

The young sailor and his quarantine roommate were immediately moved to the special isolation unit at the Tupua Tamasese Meaole Hospital grounds.

To date, all tests on the sailor’s roommate have returned negative, and both young men have showed no signs or symptoms of the virus.

“Their temperature measures are normal; no flu or cough and their appetite is fine”.