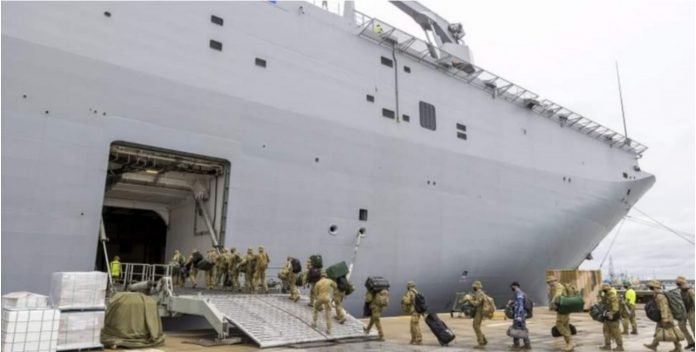 A Covid outbreak has hit a crucial Australian relief ship that has berthed in tsunami-stricken Tonga.

There are 29 confirmed positive cases of COVID-19 among the crew of the HMAS Adelaide which left Australia last Friday.

Tongan officials say that with a little help from the Tongan tug boat, Australian Defence Force staff docked the HMAS Adelaide themselves, at Vuna Wharf in Tonga yesterday, after fears over COVID-19 transmission.

Crew rode in a small boat to bring the rope to tie up the ship and then went back on board the Adelaide according to Tonga Minister for Health, Hon. Dr Saia Piukala who held a press conference with Prime Minister Hon. Siaosi Sovaleni before the ship docked.

“Those who will do this work have all been confirmed to be negative,” said Dr Piukala.

He assured the positive cases on the ship remained in isolation, together with their contacts.

There were concerns in the community that COVID-19 might be introduced to Tonga by incoming disaster relief ships, including the Adelaide.

The Tonga Prime Minister also assured the public of the safety protocols taken, stating they were working closely with Australia Defence Minister Peter Dutton who has vowed not to put the Tongan population “at risk”.

Tonga has had only one recorded case of Covid-19, a passenger from a repatriation flight in October 2021. The country is desperately trying to prevent Covid from reaching its shores as more humanitarian aid begin to arrive.

The Australian Department of Defence said the HMAS would ensure its supplies were delivered in a “Covid-safe manner”.

Authorities have stressed the need for aid to be delivered in a contactless way to avoid bringing in the virus.

More than 600 crew are onboard the HMAS Adelaide, which has on board medical facilities including a 40-bed hospital and a critical care ward onboard, said the Department of Defence.

This is the second aid shipment from Australia that has been hit with Covid – a C-17 plane had to turn around mid-flight last week after a crew member was diagnosed with the virus.

A tsunami devastated the Tonga islands two week ago after an underwater volcanic eruption that Nasa estimated was hundreds of times more powerful that WWII atomic bombs.

Officials say four-fifths of the population have been affected by the tsunami and volcanic ashfall, which continues to pose a public health risk to Tonga’s 105,000- strong population.

Authorities are determined to keep covid away, as the remoteness of some of its island communities, many with limited healthcare resources, makes them particularly vulnerable to an outbreak.