The Ministry of Health have confirmed the total vaccination count for Samoa as of today is close to 5,000.  The percentage ratio between men and women is so far, 60:40 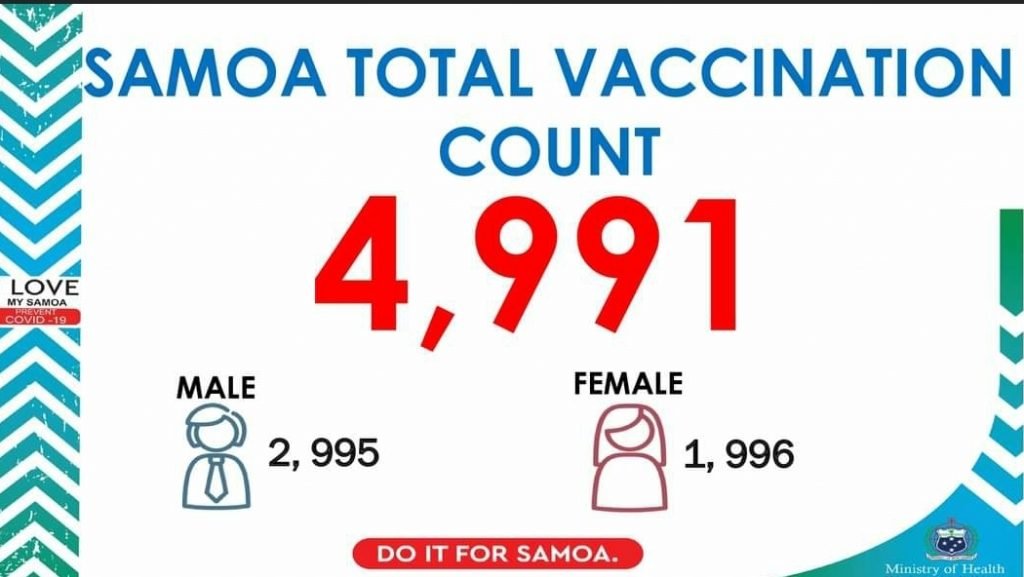 Frontliners were prioritised last week and the programme moved to include the general population this week, starting with the heavily populated Apia Urban areas of Vaimauga and Faleata.

There are 133,000 Samoans eligible to be vaccinated and although not compulsory, the Chair of Samoa’s National Emergency Operations Centre has called for people to make the right choice and be protected from the global pandemic that has claimed 3.14 million lives around the globe.

Samoa will receive 79,000 vaccines from the global COVAC facility while the Government of New Zealand has offered to provide the shortfall.

A list of those to be exempt and excluded from getting the vaccines was confirmed by Dorecrotr as:
* All persons18 years and under
* Pregnant mothers
* Mothers who are breastfeeding
* Individuals with a history of allergies to vaccines
* Those with low platelets
* Those on special medical treatments
* Those who are bedridden
* The elderly 85 years and up
* Those who have returned with illness from overseas
* And anyone with a fever

In addition to the mobile Clinics being set up in certain districts, people are able to be vaccinated at Matagialalua centre in Apia as well as the Motootua National Hospital.