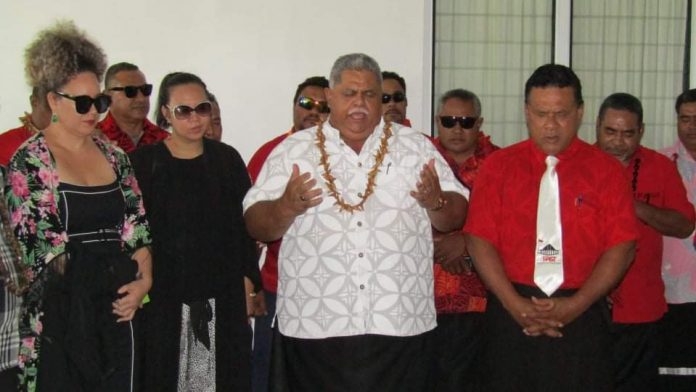 21 May 2021 Apia Samoa. The Court of Appeal has this afternoon dismissed applications for stay of execution against a Supreme Court judgement that declared an additional parliamentary seat unconstitutional and void.

The applications related to a judgement delivered just a few days ago on Monday by their Honors Justice Niava Mata Tuatagaloa, Justice Lesatele Rapi Vaai and Justice Vui Clarence Nelson; which declared unconstitutional the decision of the Electoral Commissioner and voided the subsequent Warrant of Election issued by the Head of State appointing HRPP’s Aliimalemanu Alofa Tuuau as a Member of Parliament.

The Supreme Court granted leave to appeal on the 19th of May 2021 and also referred the determination of applications to stay the execution of their judgment, to the Court of Appeal.

The Electoral Commissioner and Aliimalemanu Alofa Tu’uau as first and second appellants respectively, asked the Court for urgency, so that Aliimalemanu could attend as a sitting member of the Legislative Assembly, when Samoa’s XVII Parliament convenes next Monday 24th May 2021. The addition of Aliimalemanu as an MP, would have created a hung Parliament for Samoa, with 26-26 to HRPP and FAST.

The Court of Appeal decision was handed down at 12pm today by their Honours Chief Justice Satiu Simativa Perese, Justice Tafaoimalo Tologata Leilani Tuala-Warren and Justice Fepuleai Ameperosa Roma who made it clear that they were not concerned with the politics of which party has a majority and which party is in the minority. “The only issue before the Court on appeal is a Constitutional question of whether Article 44(1A) means that a sixth woman member of Parliament should be appointed”, reads the decision.

The matter was heard before the Court of Appeal just 24 hours earlier, over a 2-hour session yesterday (Thursday 20th May) afternoon.

FAST party lawyers Mauga Precious Chang and Muriel Lui were assisted by Mr Benjamin Keith of Thorndon Chambers, who participated via video link from Wellington. No stranger to Samoa, Mr Keith is the son of Victoria University Law Professor Sir Ken Keith who was a Judge in Samoa’s 1982 landmark Constitutional case of Sapaia Olomanu, where matai suffrage was challenged.

In Court Thursday afternoon Chief Justice Satiu Simativa Perese pressed applicants’ lawyers to highlight the basis of their submissions for a stay of execution, and the impacts of the original judgement on their respective clients, that required the Court to set it aside until the appeal was decided.

Former Attorney General Aumua Ming Leung Wai argued passionately for this client, and told the Court that the decision to allow a stay was a balancing exercise between the competing rights of the FAST party and Seuula Ioane as Respondents, versus the need to preserve the appellants’ position against the appeals submission.

Aumua said the Supreme Court judgement that voids his client’s seat does not have an impact on FAST or Seuula Ioane, but gravely affects Aliimalemanu Alofa Tuuau who would not be able to attend the XVII Parliament of Samoa when it is called.

Aumua agreed with Fuimaono there was a need to consider such applications on a case-by-base basis, weighing up factors which he submitted for the Court of Appeal to consider. Aumua argued that the appeal would have no value (nugatory) if a stay was not issued, and detailed impacts on his client and third parties, as well as public interest implications.

“The question is, what if the HRPP forms a government and my client has not been sworn in?” Aumua stated.

Aumua put to the Court that Samoa’s Article 44 to allow a minimum percentage of women in Parliament carried a high level of significance, as it was the only one of its kind, in the World.

Aumua argued the Court had to consider that his client’s appeal case was strong.

In response, Benjamin Keith acting on behalf of FAST and Seuula Ioane submitted their clients are entitled to the benefit of the Supreme Court’s declarations, the practical consequence of which is that the appointment of the sixth woman member is
set aside.

Seen and heard clearly in the Courtroom via video link Mr Keith highlighted areas that had been raised by their Honors in relation to Fuimaono and Aumua’s arguments.

Mr Keith agreed that the Electoral Commissioner, as the decision-maker whose decision is under challenge, should not take an active part in defense of it.

“But that is true of any review proceeding.. it does not entitle the decision-maker to continue to hold the belief to the contrary..” he added.

Mr Keith argued that it was the Electoral Commissioner’s right to act consistently to apply the Law as declared, whether it be by the Supreme Court or the Court of Appeal.

“I think the simplest point.. is that is very difficult to say in what interest the OEC is seeking to preserve,” said Mr Keith.

In relation to Aliimalemanu Mr Keith said the paramount issue around the question of public interest, is that the Constitution is correctly interpreted and applied.

In response to a question from the Chief Justice, Mr Keith told the Court he did not think that in weighing up the public interest, the Court should look to the implications of the numeric consequence between the two parties.

“If the appeal is upheld, and if she is appointed, she would, in a short time, be able to join Parliament…

“To introduce a Member temporarily and then possibly withdraw that Member later,.. I don’t think that helps in terms of stability, I think that makes it worse”.

Aumua in his rebuttal did not agree with Mr Keith and told the Court there would be grave impacts on Samoa and its people.

The Court of Appeal agreed with the respondents that the refusal of a stay will have no impact on the appeal.

The Court of Appeal agreed the respondents are entitled to the fruit of their judgment which translates to there being one less member in the opposing party.

“In our view it is not material that the sixth woman member is of one political persuasion or another, the Constitution only speaks about membership held by a woman”.

“In our respectful view, there is no public interest in this Court interfering with a decision of the Supreme Court where an Appellant’s appeal rights are not made worthless if a stay was not granted. The public should have confidence that there is certainty about the application of legal principles no matter what the context”, reads the judgement.

In relation to the apparent strength of an appeal, the Court was not convinced that the strength in the appeal was overwhelmingly obvious.

“it is difficult at this point to assess arguments relating to the strength of the
appeal on the material before the Court. What we can say is that the Supreme Court considered the matter from two different perspectives, and both roads led to the same conclusion”.

“We are of the view that the overall balance of convenience favors the Respondents given our assessment of the factors above, in particular our view that the rights of appeal are not made worthless by the failure to grant a stay”.

The Court of Appeal dismissed the applications for a stay of execution of the judgment of the Supreme Court dated 17 May 2021, and awarded costs in the amount of $5000 in favour of the respondents, to be paid within 30 days of the date of judgment.