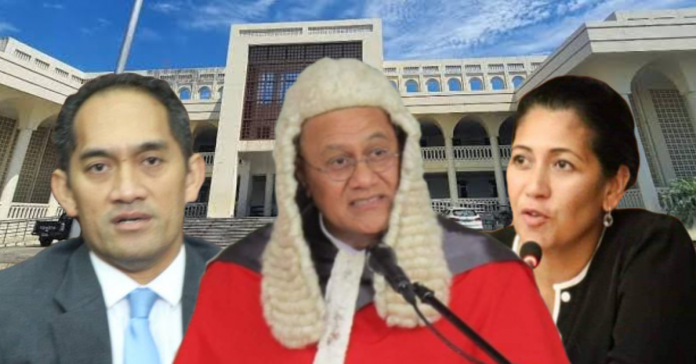 IN THE COURT OF APPEAL OF SAMOA

IN THE MATTER OF:            Articles 44 of the Constitution of the Independent State of Samoa

A N D:             ALIIMALEMANU MOTI
MOMOEMAUSU ALOFA TUUAU, Candidate of the
Constituency of Alataua i Sisifo
for the General Elections 2021
Second Appellant

A N D:             SEUULA IOANE, candidate
for the Constituency of Alataua i Sisifo
Second Respondent

JUDGMENT OF THE COURT

a. Article 44(1A) should be activated by the Electoral Commissioner;

b. Article 44(1A) should be activated after the final count of the ballot papers and before reporting to the Head of State;

c. The activation by the Electoral Commissioner of Article 44(1A) on the 20 April 2021 was unconstitutional and that the Warrant of Elections issued by the Head of State appointing the Second Respondent as Member of Parliament is void.

3. The Respondents oppose the Applications.

4. The setting of the Appellants’ applications is that they ask the Court to determine these applications before the calling of the Legislative Assembly, which we understand may be scheduled for Monday 24th May 2021, being the last day within which the Legislative Assembly is required to meet following the April 2021 General Election. This Court has therefore been urgently convened in order that we may be able to resolve the issue of whether a stay should be granted. The parties acknowledge that there is insufficient time to determine the substantive appeal before 24 May 2021.

5. We deal with both Applications together, noting where appropriate any differences or nuances in their grounds of application or arguments. The Appellants submit that the jurisdiction of this Honourable Court to stay judgment is well settled and is provided under;

6. The Appellants rely on the factors as set out in Duncan v Osborne1 and McGechan on Procedure2 as to when a stay is sought. They include;

i. whether the appeal may be rendered nugatory by the lack of a stay;

ii. the bona fides of the Appellant as to the prosecution of the appeal;

iii. whether the successful party will be injuriously affected by the stay;

iv. the effect on third parties;

v. the novelty and importance of questions involved;

vi. the public interest in the proceedings;

vii. the apparent strength of the appeal; and

7. The Respondents acknowledge that these are the relevant factors and submit that after consideration of the factors, the overall balance of convenience would lie in favour of the Respondents and a stay should not be granted.

8. The Court of Appeal’s jurisdiction to stay the execution of a judgment is set out in section 15 of the Judicature Act 2020 which provides:

10. The discretion expressed in the Judicature Act 2020 leaves its exercise open to the Court. We consider that the principles to be applied are those set out in McGechan; that is common ground between the parties.

11. The applications for stay are primarily grounded in serious concerns the appeals may be rendered nugatory, or be worthless, by the lack of a stay, and, moreover, the public interest falls in favour of the granting of a stay.

12. The First Appellant submits that Parliament must sit in accordance with Article 44 of the Constitution and if the judgment is not stayed, Parliament will be convened in contravention of Article

44. It is not disputed that the 45th day by which Parliament must meet expires on Monday, 24 May 2021. The First Appellant says that if Parliament was to meet without the Second Appellant as a member, this would render any appeal nugatory, or worthless.

13. The Second Appellant argues that she will not be able to take part if Parliament is convened and her interests will be adversely affected since she would miss out on the opportunity to take part in the first sitting, and that this could ultimately mean that she might miss out on a Ministerial post.

14. The Respondents submit that the effect of a successful appeal would mean the Second Appellant could enter Parliament at that time, a materially effective, but slightly later remedy. They argue as held in Brook Valley Community Group Inc v The Brook Waimarama Sanctuary Trust3 that some temporary obstruction of an intending Appellant does not render the appeal nugatory.

15. We are not persuaded that an appeal would be rendered nugatory, or worthless, if a stay is not granted,

16. The issue that was before the Court below, which is subject to appeal, was whether the Constitution permitted the appointment of a sixth woman Member of Parliament. Perhaps indirectly it could be argued the Second Appellant should be that sixth woman. However, it cannot be said with any confidence that the Second Appellant will automatically take the sixth seat – that will depend on a definitive determination by the Court of Appeal as to the meaning of the Constitution.

17. At present, following the Supreme Court’s judgment, the Second Appellant does not qualify for appointment or selection as the sixth woman. In essence, therefore, what she asks this Court for is relief from the Supreme Court’s determination. However, in seeking that relief, what the Second Appellant is actually asking for is a type of relief that might not be confirmed after the appeal – that she is rightfully the sixth woman member.

19. We are not concerned with the politics of which party has a majority and which party is in the minority. The only issue before the Court on appeal is a Constitutional question of whether Article 44(1A) means that a sixth woman member of Parliament should be appointed.

Whether the successful party will be injuriously affected by the stay

20. The Respondents’ submit they are entitled to the benefit of the Supreme Court’s declarations. The practical consequence of the declarations is that the appointment of the sixth woman member is set aside.

21. In our view it is not material that the sixth woman member is of one political persuasion or another, the Constitution only speaks about membership held by a woman. We agree with the submission by the Respondents. The Respondents are entitled to the fruit of their judgment which translates to be one less member in the opposing party.

The effect of third parties and the public interest

23. The Second Appellant submits that the uncertainty surrounding her seat could cause instability regarding the formation of government.

25. We agree that there is public interest in the outcome of the appeal, being a definitive interpretation of Article 44(1A).

26. However, we do not agree that there is a public interest in granting the stay. In our respectful view, there is no public interest in this Court interfering with a decision of the Supreme Court where an Appellant’s appeal rights are not made worthless if a stay was not granted. The public should have confidence that there is certainty about the application of legal principles no matter what the context.

The novelty and importance of questions involved

27. The Respondents submit that the relevance of the legal novelty and/or importance of questions in issue to the grant of a stay is directed to the concern that, if a stay is declined and an appeal may therefore be abandoned, novel questions of law may go unanswered. They argue that this not the case here.

28. We agree with the Respondents. The refusal of a stay will have no impact on the appeal.

The apparent strength of the appeal.

29. The First Appellant submits that in terms of the Supreme Court’s decision, there is already support of the position of the First Appellant, and their prospect of success on appeal is strong.

30. The Second Appellant considers that there is some confusion in the judgment of the Supreme Court and that this Court should, in the public interest, determine the issue and clarify the number of women who should be representatives in the legislative assembly.

31. The Respondents submit that it is generally very difficult for the Court to assess arguments as to strength without entering the appeal itself. They submit that all members of the Supreme Court found against the Appellants albeit on different bases.

32. We find that it is difficult at this point to assess arguments relating to the strength of the appeal on the material before the Court. We are not convinced that there is strength in the appeal which is so overwhelmingly obvious, at this point. What we can say is that the Supreme Court considered the matter from two different perspectives, and both roads led to the same conclusion. This suggests that it will be difficult, but not impossible, for the Appellants to argue a third course which leads to a different place altogether. It is important that the Appellants pursue their appeal so that this Court can provide a definitive view of this most important concept in our Constitution, which as Mr. Leung Wai submitted, is the only one of its kind, in the Pacific, if not the World.

33. The Appellants submit that the balance of convenience lies in their favour.

34. The Respondents submit that a stay would in substance see the Second Appellant sit and act as a member of the Assembly despite the Supreme Court having held her appointment to be unlawful and despite that judgment having not yet been considered, let alone upheld or overturned by this Court.

35. We are of the view that the overall balance of convenience favors the Respondents given our assessment of the factors above, in particular our view that the rights of appeal are not made worthless by the failure to grant a stay.

36. Accordingly we make the following orders;

a. The Applications by the First and Second Appellants for a stay of execution of the judgment of the Supreme Court dated 17 May 2021 are dismissed;

b. Costs are awarded in the amount of $5000 against both First and Second Appellants in favour of the Respondents, to be paid within 30 days of the date of judgment. 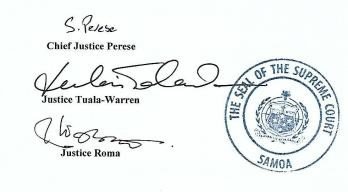