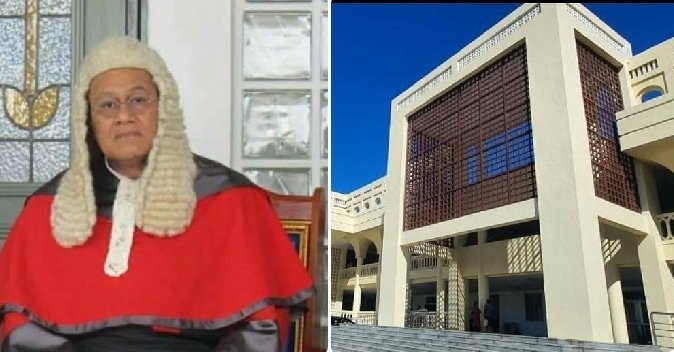 25 June 2021, Apia Samoa.  The Court of Appeal has set down clarifications to their decision of 2nd June 2021 stating the Court did not rule (emphasis in judgement) or declare that the convening of Parliament as mandated under Article 52 of Samoa’s constitution, should depend or rely on the activation of Article 44(1)(A) – a clause in Samoa’s Constitution that allows for additional women to be appointed from amongst unsuccessful candidates, if six women (min 10%) do not get elected through the polls.

In its clarifications, the Court of Appeal reiterates that their original decision had set aside the appointment of Aliimalemanu Alofa Tuuau as the sixth woman.

The Court specifically spells out, that after their decision of 2nd June 2021, any suggestion that both parties continued to hold 26 seats each, is wrong.

“A further seat may be added after any by-elections. There is no certainty that Article 44(1)(A) will be required to be called on to supplement the guaranteed number of women members of six, because a sixth woman member may win an electoral constituency seat in a by-election”, states the Court of Appeal ruling.

The Application was brought before the Courts by the FAST party, submitting through Counsel, Benjamin Keith, that clarification was needed because the Court of Appeal decision of 2nd June 2021 that dealt with the question of how and when Article 44(1)(A) is to be applied, was being held out in public as saying something that it had not.

In handing down the decision Chief Justice Satiu said the Court had accepted as the only evidence available to it, an affidavit by Honorable Fiame Naomi Mataafa regarding negotiations she had held with Hon Tuilaepa Sailele Malielegaoi whereby “Tuilaepa asserted that the Constitution does not permit Parliament to convene until all current election petitions, and any consequent by-elections, and any subsequent appointment of any additional member(s), is completed”.

“The evidence supports the Applicant’s case that the terms of the 2 June 2021 decision are not being obeyed,” reads the judgment.

“Whilst we accept that there may be a measure of “negotiation tactics” in the assertions, nevertheless, they are what they are, and they are unchallenged and therefore unacceptable misrepresentations of the law”.

The Court of Appeal considered that their original judgment was clear, however, it also states that “Hon Fiame Mataafa’s affidavit deserved a response, if one could be provided”.

The Court acknowledged Hon Fiame’s concern that the judgment was being used “as substantive justification for the retention of power and failure to transition power to her party”.

The Court of Appeal acknowledged that Samoa was in unchartered legal and constitutional waters. “But what is certain is that the Constitution of Samoa applies, and therefore the Rule of Law applies”.

“We consider that it would be scandalous, if in the context of the present Constitutional crisis this Court, the final Appellate Court in Samoa, did not do all it reasonably could to articulate the Law”.

“If this means issuing clarifications as to the meaning of judgment, then it should do that.”

The Court of Appeal also considered that there was not enough evidence before the Court to determine if public misinterpretations of the 2nd June 2021 decision were made maliciously, carelessly or otherwise.

The Court of Appeal granted costs of $1,000 tala against FAST in favour of Aliimalemanu Alofa Tuuau. “Given that there was a broad suggestion of contempt like behaviour, she was put to the expense of instructing Counsel, both locally and overseas, and they filed submissions and appeared at the hearing..”

Last week former CJ Patu Falefatu Sapolu held an interview with TV1 later translated and distributed by the government press secretariat, that expressly stated his view that Parliament could not convene until Article 44 was activated. The same view was shared by HRPP’s Deputy Leader Fonotoe Pierre Lauofo.

In the meantime election petitions are being heard before the Supreme Court and decisions handed down each week. So far, only one petition has resulted in a seat being vacated.  Elected HRPP MP for Sagaga 2 Seiuli Ueligitone Seiuli had his seat declared void by the Supreme Court following a petition by former Associate Minister of Health Maualaivao Patelesio Ah Him.

While awaiting the consequent by-election results for over a dozen more cases, the numbers currently sit at FAST 26, HRPP 24.

Court of Appeal Judgment in full: 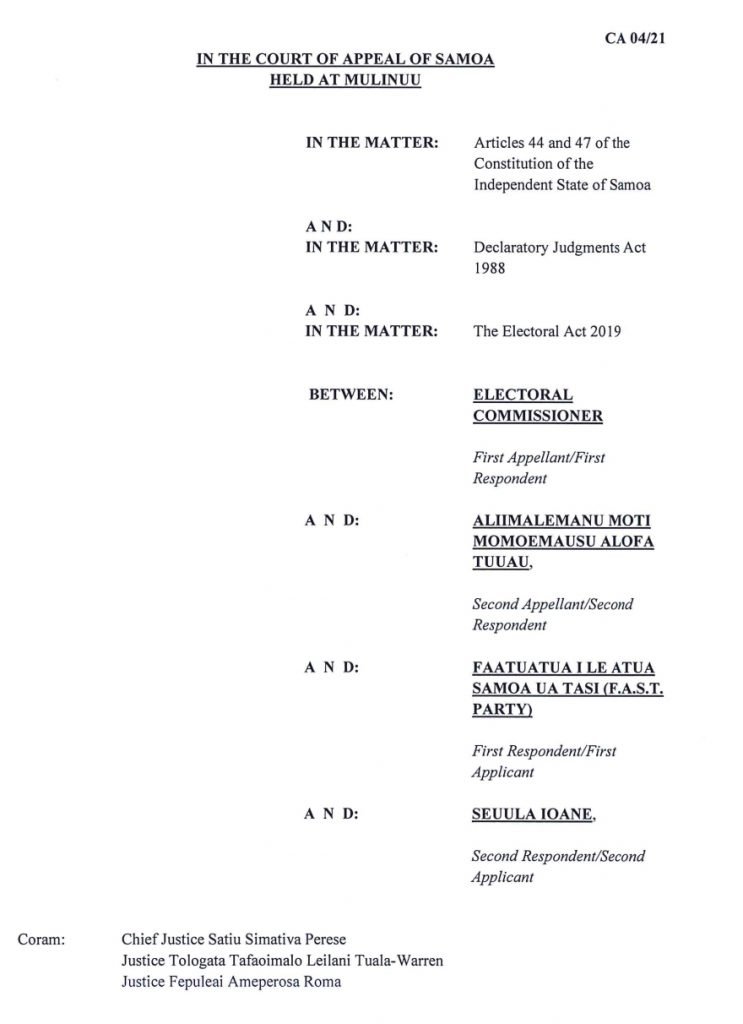 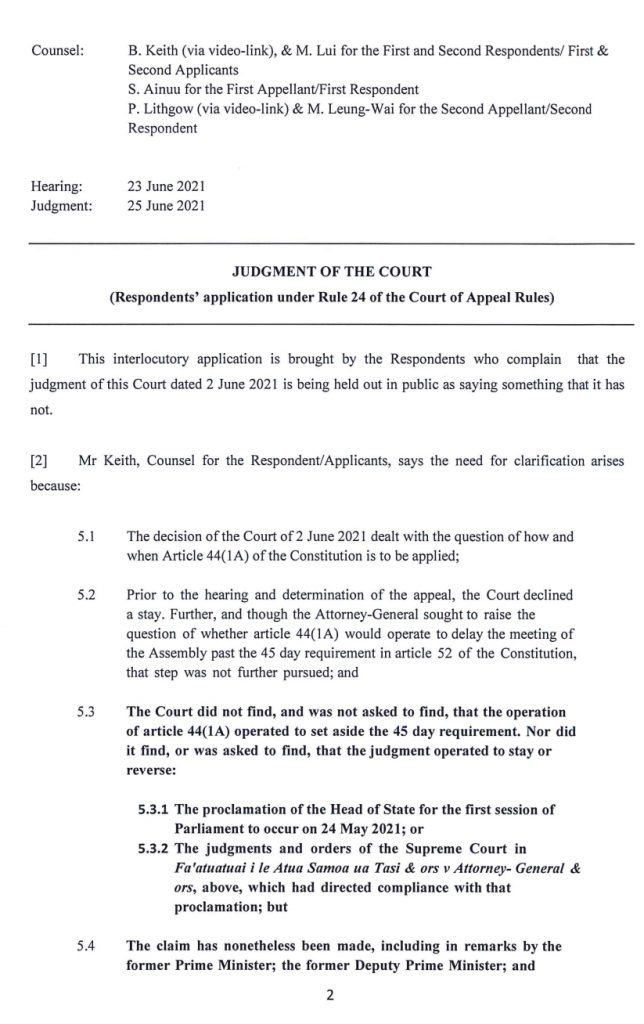 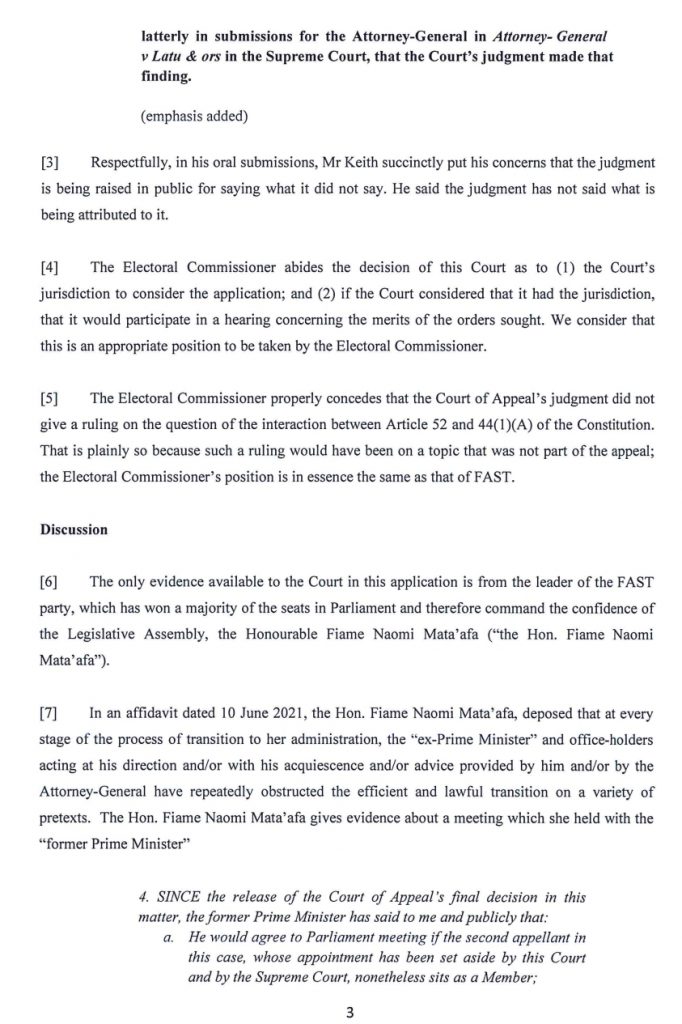 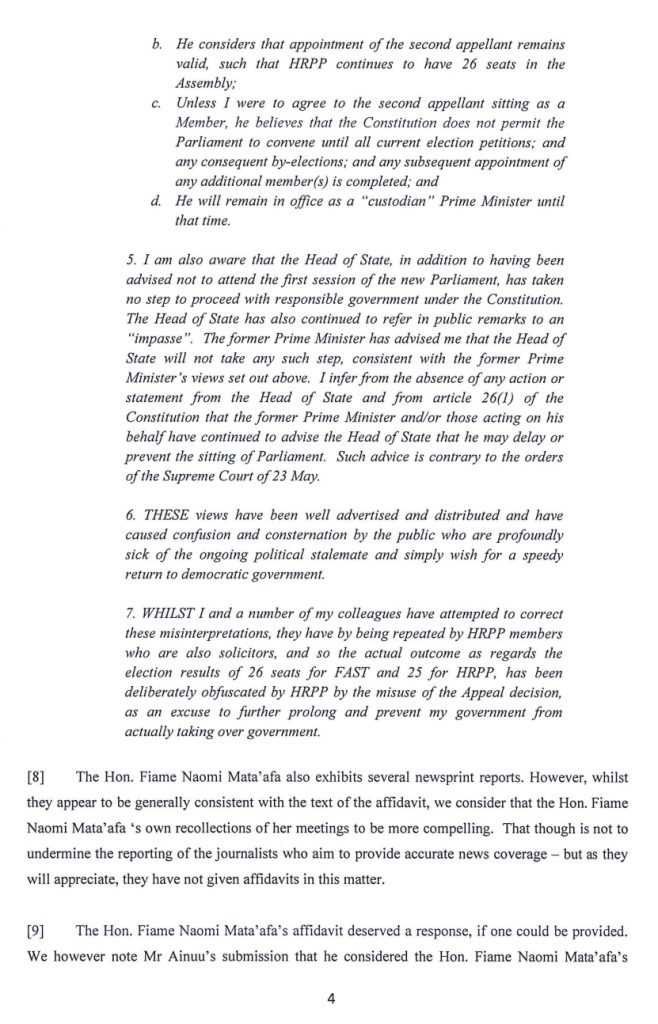 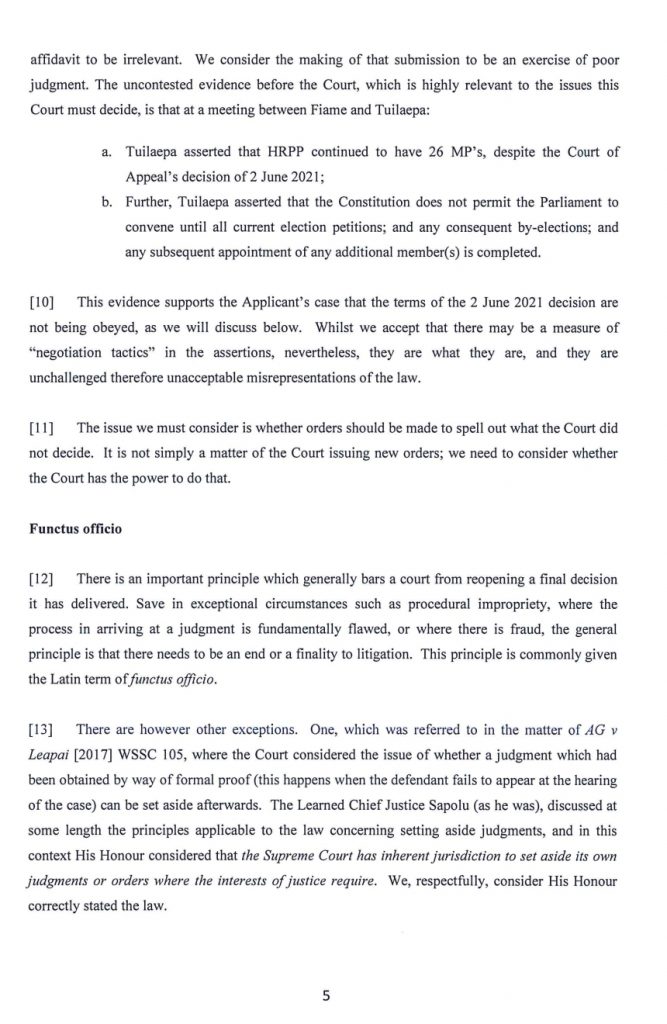 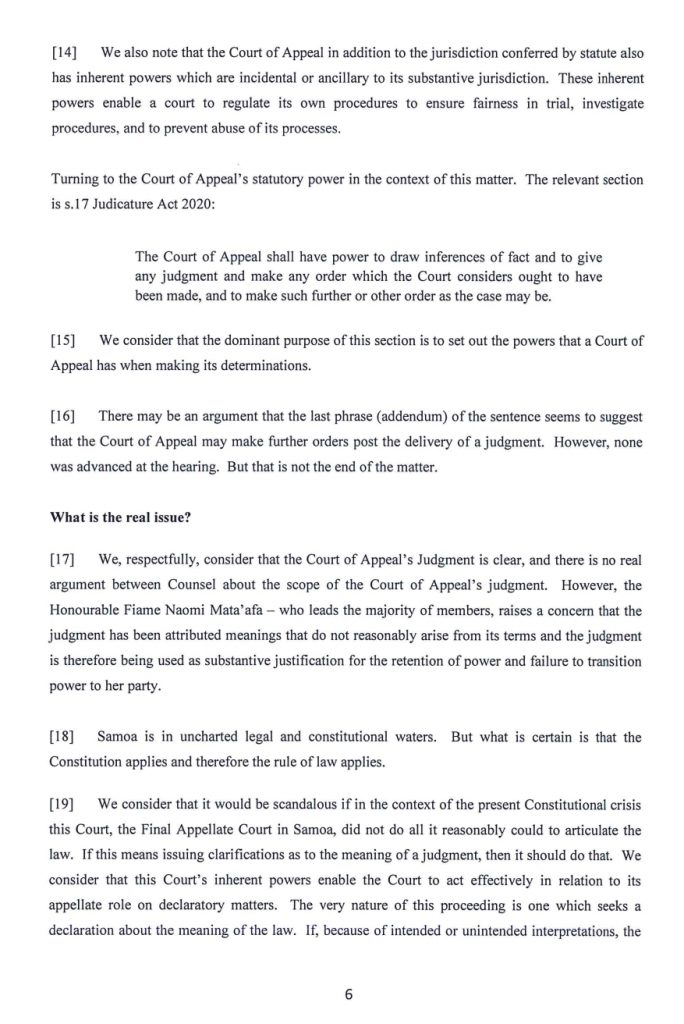 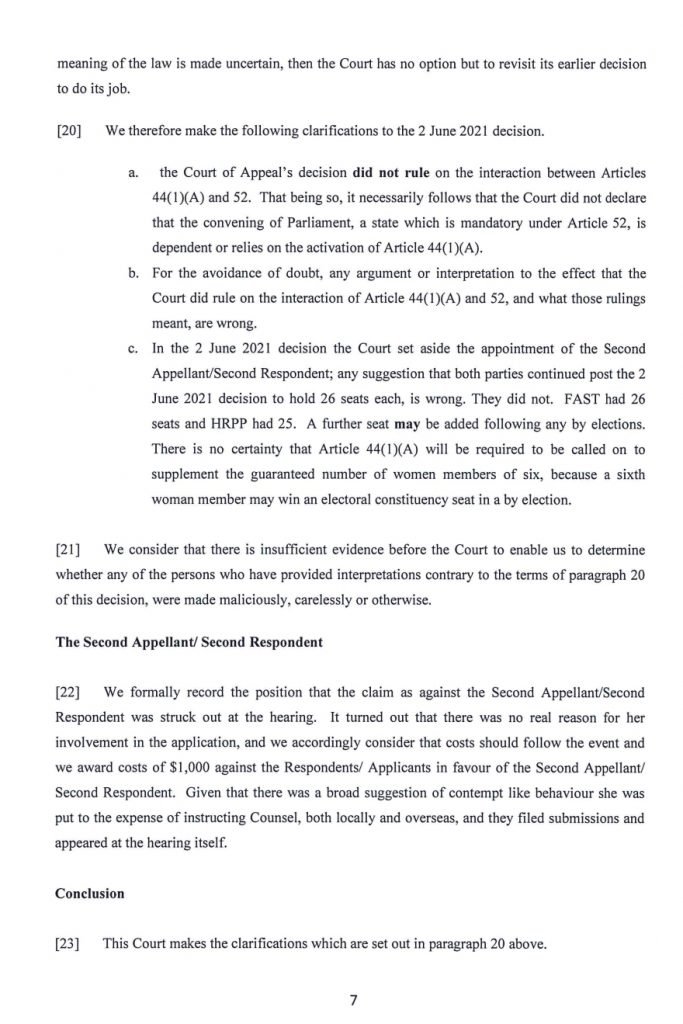 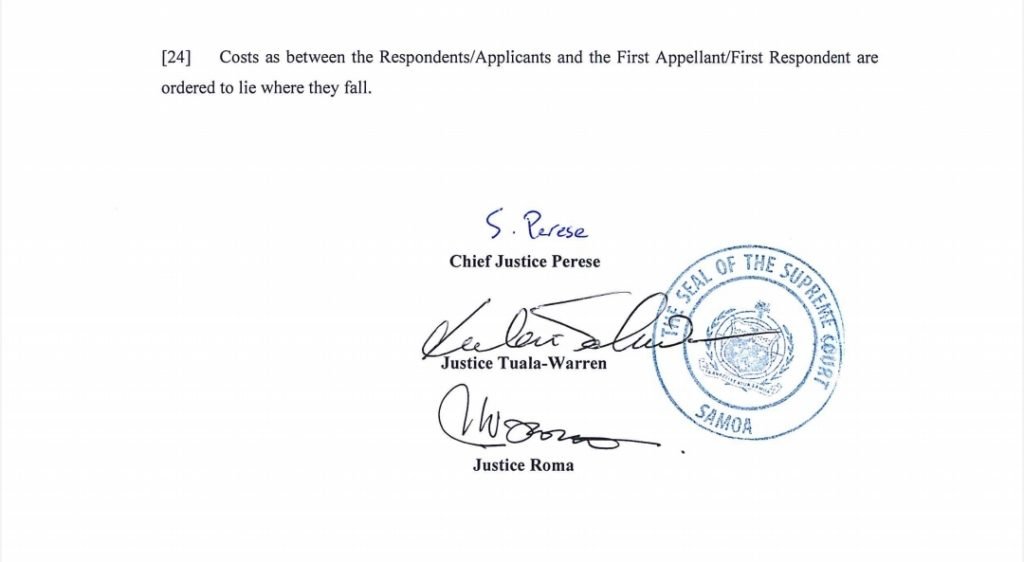