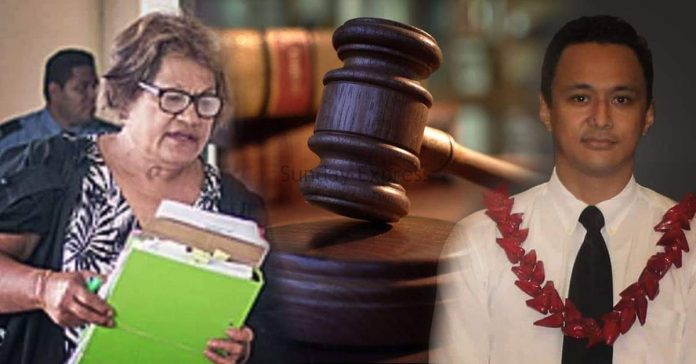 3 April, 2019 Apia Samoa. Violation of prisoners’ human rights was the main focus of Unasa Iuni Sapolu’s final submissions before Justice Tafaoimalo Leilani Tuala-Warren on the fight for Filipaina to be transferred back to Tafaigata Prison from the Apia Police Station.

The Court heard that Tagaloasa Filipaina and Ovaleni Poli are not receiving the same privileges as other inmates held at Tafaigata.

Serving a life sentence for the murder of a police officer in the 1980s, and a second murder in the early 2000s, Tagaloasa Filipaina and his relative Ovaleni were transferred out of Tafaigata in February last year suspected of planning a mass prison breakout.

Unasa told the Court that inmates at Tafaigata do not need to apply to go to church, exercise or go outside, as these are all normal prison activities.

At the Apia Police Station however, Unasa submitted that her clients spend 22-23 hours of their day sitting inside their air conditioned cells.

“They only get one hour to come outside and sit there;

“That’s not exercise, they need to have proper exercise such as zumba,” argued Unasa.

Unasa refered to the testimony of Deputy Commissioner Papalii Monalisa Keti during the hearing.

“She was asked why the applicants were not receiving things such as soap, reading books, piano and so forth she replied, ‘e le’i talosaga mai’;

“Do they have to apply to get these?;

“These are common sense rules and at Tafaigata they have the priviledge to exercise, play the piano and so forth whereas here, they are doing nothing and this is clearly a violation of human rights.”

Respondent from the Attorney General’s Office Sefo Ainuu told the Court that the prisoners were being kept at Tafaigata because of alleged reports that they had planned a mass prison breakout.

“We have heard the testimony of the Prison Commissioner, Taitolesaua Edward Winterstein  that these prisoners were being transferred to Apia because of the alleged reports that they were dealing drugs inside Tafaigata and also they were the masterminds beind the alleged mass prison breakouts,” Ainuu told the Court.

Ainuu told the Court that the current arrangement was only a temporary measure and that Filipaina and his relative would be moved to the new Tanumalala prison once it is completed.

“The Apia Police Station has been declared a prison by the Minister, and we have heard during Taitolesaua’s testimony that the applicants are only here until the completion of the new prison, then they will be moved there;

“So your Honour, the applicants are only at the Apia Police Station temporarily not permanently.”

In responding to the issue of zumba Ainuu said that the Apia Police Station area did not allow the space for it.

“The applicants were informed by the police that there is not enough space for them to conduct zumba, as we all know the only space at the police station is the one at the back which they were told is not an appropriate place for zumba as it is always packed,” said Ainuu.

“That is why they get an hour every day to come into the waiting room outside and there is enough space in that area to do exercise;

“Their cells are also big enough to do push ups and sits ups,” he said.

Ainuu concluded his submissions with an application for the matter to be dismissed and for defense counsel to pay police costs.

Justice Tuala-Warren will deliver her decision on the 17th of May 2019.