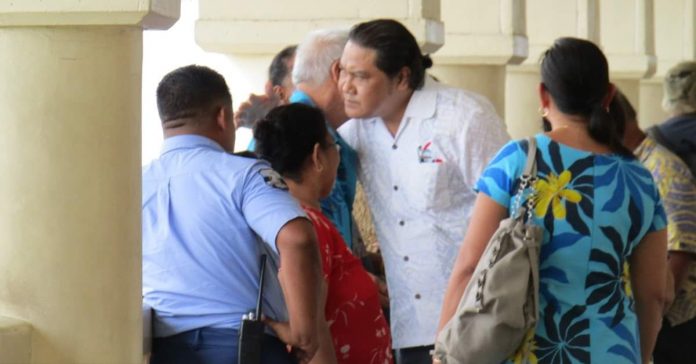 Kolani Junior Lam took the stand to give evidence in the 2-week long judge-only trial before Justice Mata Tuatagaloa to vehemently deny the charges against him, insisting that he had found his late wife hanging from a tree at the back of their Sinamoga home.

Prosecution rested earlier this week after 30 witnesses including Justina’s daughter, mother, best friends and babysitters had given allowable propensity evidence of regular abuse riddled with known signs of domestic violence such as power and control, isolation, denial and hightened incidents followed by honeymoon periods of calm and normality.

Kolani told the Court that he and his wife had been talking in the kitchen that Saturday night when they started to argue because according to Lam, Justina kept talking about her ex husband.

Angered, he stood up and walked away to check on the children. He says when he finished checking on the babies, he checked on his twins and then walked back out to look for Justina.

He looked outside to see Justina by the cinema tree in their backyard. He walked closer to see Justina’s body hanging from a rope with her feet touching the ground. He had rushed over and tried to release her from the rope however he says Justina was too heavy. So he ran back into the house to get a knife which he used to cut the rope above her head.

Kolani Junior Lam told the Court that he placed his wife’s limb body on the ground and began CPR. He says he had forgotten that the rope was still around Justina’s neck so he ran back into the house to fetch another knife.

He used that knife to cut Justina’s neck free, injuring her neck in the process. This is consistent with the coroner’s report which highlighted the small incision on Justina’s neck.

He performed CPR six or seven times but there was no heartbeat. He then cried tears over his wife’s motionless face and asked her why she had done this without saying anything to him or the children.

The accused says his brother Ronald arrived and they carried Justina into the house where Ronald performed CPR again.

The landmark trial that allows prosecution to bring in propensity evdience as to the character of the accused continues in the Supreme Court of Samoa.

In previous cases of manslaughter heard before Samoa’s Supreme Court where women have died at the hands of their husbands, prosecution have only presented facts of the isolated incident leading up to the deaths, and not the holistic picture of long term abuse.

This week the Courts have heard a babysitter’s testimony of an incident where the accused has thrown a kettle at Justina, hitting her on the head, knocking her out cold. Kolani did not deny this incident, saying that in anger he had “chucked” the kettle which hit Justina on the head.

Another babysitter spoke of an incident where Justina was holding still a small round table, at about 1am, while Kolani ate after drinking with friends. She had heard him yelling at her when his meal was disturbed by the table moving.

The Court also heard a babysitter convey an incident where Kolani had asked Justina’s daughter Talei why she did not call him Dad.

When Talei’s response did not impress him, he threw things around, yelling and demanding respect from his step daughter.  It is the babysitter’s testimony that Justina had come into Talei’s room that night to ask her daughter if she would like to come and apologise to Kolani.

Talei had asked her mother why she had to say sorry.

Justina’s best friend and Owner of Samoa Stationery and Books (SSAB) also told the Court of a washing machine purchased by Justina for the Sinamoga home which was brought in for repairs after Kolani had punched it following an argument with Justina.

The allowable evidence of previous incidents presented in Court over the past two weeks establishes many facets of Domestic Violence as highlighted in the findings of Samoa’s recent National Inquiry into Family Violence Report by the National Human Rights Commission.

The Court heard testimonies of incidents pointing to tip-toeing and walking-on-egg-shells in between cycles of heightened incidents of abuse coupled with isolation and excessive jealousy centred around the assertion of power and control by threatening violence and breaking personal property.