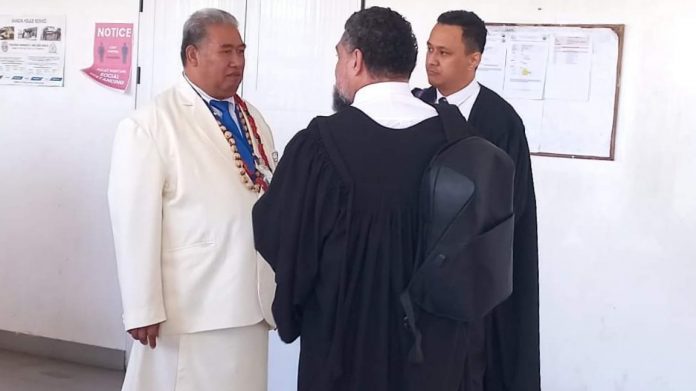 The Courts heard a submission to dismiss defamation charges against an Australian-based radio announcer filed under Samoa’s criminal libel laws.

Tiumalumatua Maifea Fetu is alleged to have spoken out against Prime Minister Fiame Naomi Mataafa and other members of Cabinet on the Samoa Toe Faaolaola radio show broadcasted in Melhourne, Australia.

On Thursday in Court, Tiumalumatua’s lawyers Fuimaono Sefo Ainuu and Faimalomatumua Matthew Lemisio put forward their reasons for a dismissal.

Former Assistant Attorney General Ainuu argued that the actions of his client and broadcasting at the centre of the charges was done in Melbourne and therefore outside the jurisdiction of the Samoa Courts.

Judge Leota Raymond Schuster asked Ainuu to point out the legal authority to back the argument that the case was outiside of Samoa’s jurisdiction.

The widely publicised case of Malele Paulo aka King Faipopo was heard in Samoa’s District Court, even though Paulo was overseas when the statements were made on social media.

Judge Alalatoa Rosella Viane Papalii sentenced Paulo to seven weeks under the same libel law – Section 117(A) of Samoa’s Criminal Act.  There was no Court hearing in Paulo’s case however, because King Faipopo had pleaded guilty to the charges.

A resident of Melbourne, Tiumalumatua was charged when he travelled to Samoa in July to attend the Methodist Church Annual Conference.

Outside Court on Thursday, the presence of FAST party supporters was felt with over 20 who had come to Court. There was a similar number of supporters and family members for Tiumalumatua.

Judge Schuster will deliver his decision on Friday morning on whether the charges will be dismissed, or if the hearing for defamation will continue.

The defense for defamation is to prove the statements made are true. The commnets made by Tiumalumatua are no longer accessible in any public forum.