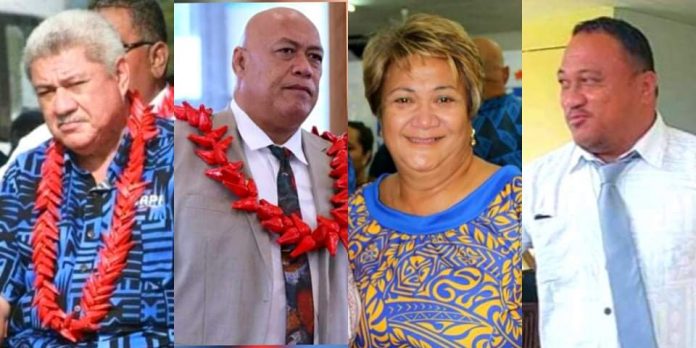 The Contempt of Court motion filed by the Fa’atuatua i le Atua Samoa ua Tasi (FAST) political party against eight respondents was heard in the Supreme Court on Monday morning before an all-overseas based bench, who have reserved their decision after hearing apologies from five of the eight respondents through their legal counsels.

There were initially four respondents to the motion filed in May 2021 amidst the peak of Samoa’s political crisis, alleging members of the Human Rights Protection Party had continuously scandalised and undermined the authority of the Court – through specific wording and phrases used during HRPP live updates and TV 1 Good Morning Samoa programs that publicised strong views against decisions handed down by Samoa’s Supreme Court and Court of Appeal.

In the midst of Samoa’s 2021 political crisis, HRPP’s media campaign had openly discussed the party’s position; that the Samoa Judiciary had dismantled and destroyed the Constitution of Samoa, alleging the Courts had colluded with FAST to displace the HRPP-led Government.

Former Prime Minister Tuilaepa Dr Sailele Malielegaoi, former AG Savalenoa Mareva Betha-Annandale, former Speaker of the Legislative Assembly Toleafoa Apulu Fa’afisi and former Clerk of the House Tiatia Graeme Tualaulelei were the first four respondents, for their role in Parliament not convening on the 24th of May as directed by the Supreme Court in a decision handed down Sunday 23rd May, carried out on a pickwick basis.

Legal submissions by lawyers of all parties were heard before Justice Robert Fisher and Justice Raynor Asher, who also participated via video link.

With the political crisis now seemingly in the distant past and the FAST party now settled into their role as Samoa’s new government administration, Tuilaepa’s lawyer referred to a memo jointly signed by his client and Prime Minister Hon Fiame Naomi Mataafa, noting the nation had moved forward and FAST, as applicants, wished to withdraw.

The Supreme Court, however, considered the charges as serious. Notwithstanding the applicants wanting to withdraw, the Supreme Court would  consider the nature of the various contemptuous statements and impacts on the Court.

All three HRPP MPs including its leader, deputy leader and party secretary apologised to the Court and withdrew their public statements. Lawyer Maiava Visekota and TV presenter Taulealeausumai Sioeli took the same stance.

Aumua said his clients acknowledged making statements that could have undermined confidence in the Court and Judges of Samoa. He offered apologies for all four and submitted his clients – two senior Members of Parliament, a senior lawyer and a long serving broadcaster, regretted the public statements.

Taulapapa linked statements made by the respondents to the type of contempt – scandlising the court and obstruction of the Courts various decisions in the months following the April general elections. Taulapapa also spoke to the overall impact behaviours demonstrated by the Respondents during that time.

Outside Court Counsel for FAST Matafeo George Latu said all the legal submissions were now before the Court to make their decision, expected to be handed down in two weeks.

Willful Disobedience of Court Orders for acting in breach of the Orders made by the Court.