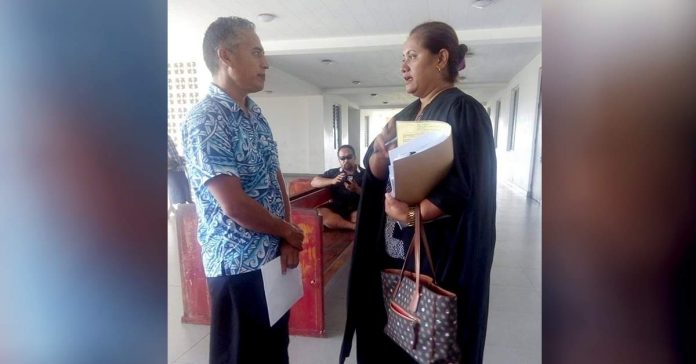 The hearing will begin this week in the District Court of Samoa for a man who was arrested and charged by police during the height of the measles epidemic in December last year.

Edwin Tamasese faces charges under Section 41 of the Crimes Act for “intention to undermine the authority of the Government of Samoa and the State of Emergency Order dated 16 November, 2019”.

Judge Loau then recused himself from the matter, declaring familial ties to one of the prosecution witnesses. The hearing will to continue on Tuesday with Judge Talasa Atoa presiding.

Tamasese was arrested in Savaii on Thursday 5th December 2019 during the mass vaccination of Samoa’s population during a whole-of-nation 2-day shut down in a national effort to contain the measles outbreak that ended up causing nearly 100 deaths; mostly babies under 12 months old.

Tamasese had taken to social media on that day, commenting on a post by SkyEye owner Faamausili Sam Saili. Faamausili’s post showed over one hundred government vehicles ready to despatch as mobile vaccination units across the country.

Tamasese had posted a comment on that post, “I’ll be here to mop up your mess. Enjoy your killing spree”.

Outside Court yesterday afternoon, Edwin Tamasese maintained his innocence and told the media that he personally treated over 160 babies and advised over 340, who all showed immediate signs of recovery within 24 hours of being given Vitamins A and C, in order to help their immune systems fight the virus.

“It all started when one of my staff members came to me about her baby who had contracted the measles. She said they’d been to the hospital twice but still her baby was not getting better”.

When Tamasese inquired about the medication issued by the National Hospital, his staff member told him her baby had been prescribed antibiotics and liquid panadol.

“The treatment they were using at the hospital was actually wrong,” said Tamasese.

“Measles is a virus so antibiotics are ineffective, and so is panadol..”

Tamasese said he gave his staff member Vitamins A and C for her baby and within days, the child had fully recovered.

Tamasese’s staff member started to tell people about the vitamin treatment, and the information went viral on social media.

“The next thing I knew, my phone was flooded with thousands of text messages from parents of children, desperate for help…”

Tamasese says he did explain to people that he was not a doctor, and encouraged them to go to the hospital or seek help from a doctor. However, parents started to panic as the death toll rose by the day.

Tamasese said babies who took Vimatins A and C recovered within 24 hours, and within 5 to 7 days, had fully recovered and back to their old selves again, according to their parents.

Tamasese said he then worked with a group of 6 doctors and RNs from overseas to treat children; evaluating outcomes and fine tuning treatment protocols.

“We got to a point where we were getting kids on the recovery path within 9 hours, and fully recovered in 3 days”.

The Government has since denied the need for a national inquiry into the number of babies and people who had died from the Samoa measles epidemic, saying they only know why so many children in Samoa died.

The prosecution is expected to call five witnesses in the case against Edwin Tamasese on Tuesday morning.