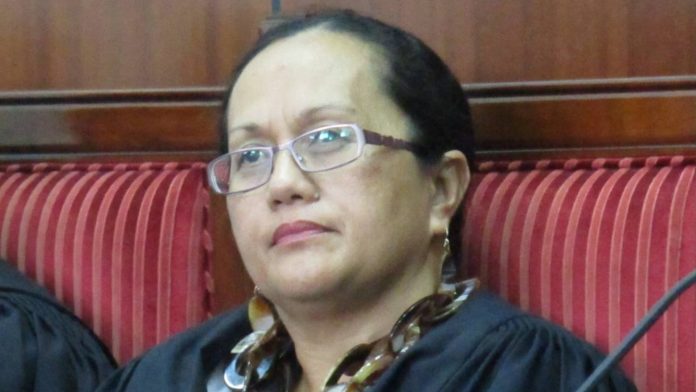 The woman who was arrested by police and accused of dumping her baby in a rubbish bin at Mulifanua Wharf has been granted a media block by the District Court against publishing her photographs.

Judge Alalaatoa Rosella Papalii of the District Court ordered the media to refrain from publishing photos of the defendant.

“From now on the media is not allowed to publish any photo of the accused.”

Judge Alalaatoa expressed concern for the well-being of the accused, saying that the Court must sit back and consider her perspective as well as Samoa’s Christian and Cultural principals.

“It is not because of any special treatment, what we do know and from our christian principals as well as cultural, there should always be a sensitivity to activities of this nature;

It’s not because we are trying to protect those who have come before this Court, but we must look to other repercussions that may arise.”

“The court is not made up of missionaries, we are humans and as humans, we must bare in mind that those particular circumstances, we never know what is going on in the mind of this accused, which is why I have ordered psychological assessments to be carried out”

Judge Alalaatoa added, “Put yourself in her shoes, as a parent, as a defendant, and then sit back and try and examine, how do you feel if that’s you in those shoes.”

The 22 year old pleaded guilty this week to the charge of “Concealing dead body of a child” under Section 117 of the Crimes Act 2013 which carries a maximum penalty of 2 years imprisonment.

Afioa’e had originally appeared in the Supreme Court where it was expected that she would be charged with Infanticide under Section 110 of the Crimes Act which deals with a mother causing the death of her own child within 12 months of its birth.

The Samoa Shipping Corporation security guard who found the newborn baby wrapped in a lavalava and placed into a plastic bag inside the wharf rubbish bin said that the newborn child was a girl.

“I was emptying out the rubbish bins on Saturday morning after the 6am ferry had departed for Savaii, when a heavy object fell out of the rubbish bin”.

During proceedings defence counsel Su’a Helene Wallwork applied for closed court proceedings on the basis that Afioa’e Sale had been bullied by public commentary on social media.

Su’a also argued that the case should be heard in the Family Violence Court.

Rexona Titi for prosecution argued that Family Violence Court focuses on prevention of violence, adding that “this case is a direct offense to the State”.

Su’a argued that there was no evidence that Afioae ended the life of her own the baby, referring to her client as the ‘victim’ and to the dead child as a ‘still born’.

“There is no violence involved, there is no other victim involved. In fact, the only victim in this, is the defendant and her still born baby,” Wallwork told the Court.

“The health and well-being of the defendant is an issue and the justice system does have a duty to protect that”, she added.

The Ministry of Women confirms that Samoa signed the Convention of the Rights of the Child in November 1994 to ensure a legislative framework is adopted to protect the rights of all children in Samoa.