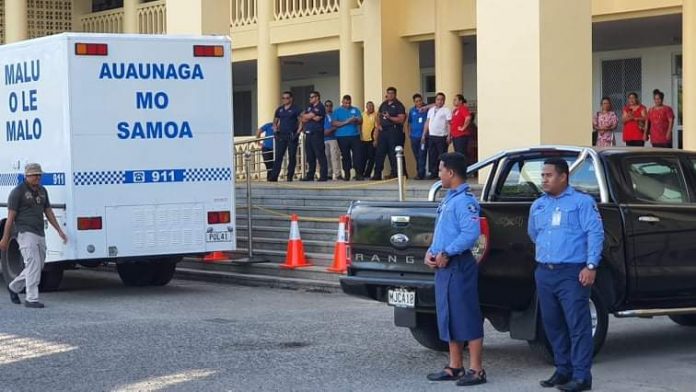 Wed 19 May 2021, Apia. Samoa’s historic election saga continues in the Supreme Court this morning following a dramatic set of events since the nation’s closest general election results in over 40 years.

In an email to inform all media sent just after 10pm last night the Registrar of the Supreme Court Ms Moliei Simi-Vaai confirmed the scheduling of two matters to be heard this morning Wednesday 19th May 2021.

At 10.00am a hearing has been scheduled for a Stay of Execution of Judgement seeking the Court to temporarily suspend the execution of the Supreme Court judgement regarding the additional Parliamentary seat, until the Appeal process is complete.

At 12.00pm the Supreme Court will hear an Appeal application against a judgement where the Supreme Court declared an attempt to appoint an additional Member of Parliament, as unconstitutional. The decision was handed down at 12pm on Monday afternoon by Justice Lesatele Rapi Vaai – a former Justice of the Supreme Court of Samoa who had been recalled to assist with pre-election challenges that flooded the Courts last November. The unanimous decision included  Senior Justices of the Supreme Court Niava Mata Tuatagaloa and Vui Clarence Nelson.
The second decision is not being appealed.. where the Supreme Court found the writ issued by Samoa’s Head of State to revoke national election results, as unlawful. Chief Justice Satiu Simativa Perese handed down the decision on behalf of the 3-judge bench that included Justice Vui Clarence Nelson and Justice Tafaoimalo Leilani Tuala-Warren.
Jointly considered, the two separate Supreme Court judgements took the nation back to its official election results published Friday 16 April 2021.
The historic results saw the rule of the Human Rights Protection Party (HRPP) come under threat for the first time in 40 years, when the newly established FAST party secured and equal 25-25 seats with HRPP. The decision of Independent MP Tuala Iosefo Ponifasio to join FAST giving them the one-seat majority of 26-25.
HRPP has been led by Hon Tuilaepa Dr Sailele Malielegaoi since the death of former Prime Minister Tofilau Eti Alesana in 1998. Tuilaepa turned 76 last month and has established a legacy as the longest serving Pacific leader.
FAST party leader Hon Fiame Naomi Mataafa has the numbers to form a new government and become Samoa’s first woman Prime Minister; and is calling for Parliament to convene as soon as possible.
Fiame has established the win, calling for the Head of State to immediately convene Parliament as mandated by the country’s Constitution. The former HRPP Deputy Leader  would become Samoa’s first woman Prime Minister
Fiame and senior members of FAST delivered a letter to the Head of State yesterday afternoon, confirming the list of 26 FAST candidates, however, in a live broadcast on Monday night, HRPP’s leader and Caretaker Prime Minister says Parliament cannot convene until some 75 election petitions currently before the Courts, are heard and decided.
The Samoa 2021 election saga continues..