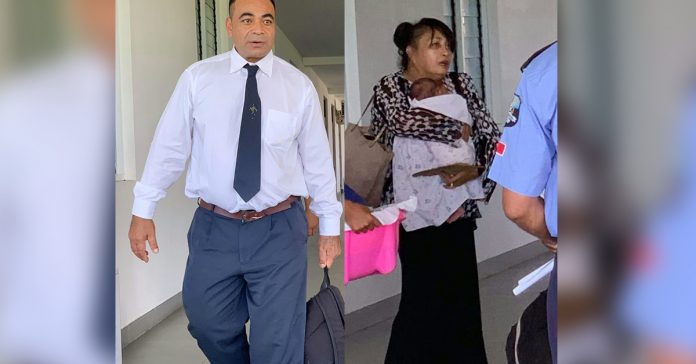 Prosecutor Leone Mailo-Su’a made an application for the matter to be adjourned to next week Monday so they could finalise charges.

Speaking to Samoa Global News outside Court Ms. Sua-Mailo said the incident occurred on the 25th of June this year where an alleged pistol, marijuana as well as amunition were found in possession of the couple.

They were both remanded in custody from that time until now.

Justice Leiataualesa granted bail for Senora Craig Chong Nee while Oscar Chong Nee had to remain in custody until next week Monday.

“Senora, you are to surrender all your travel documents, reside at Salelologa and you are to sign at the Tuasivi Police Station every Tuesday and Friday before 12 in the afternoon,” said Justice Leiataualesa.

“As for you Mr. Chong Nee, you will be however, remanded in custody to reappear next week Monday 29th of July at 10am, because the charges against you include an alleged possession of narcotics, firearms as well as amunition.”

Mr. Chong Nee requested the court if he could also get bail because it is just his wife and their 1 month old baby at home.

However, Justice Leiataualesa clarified to Mr. Chong that because the charges are in relation to firearm involving amunition, therefore he needs to be remanded in custody until next week when prosecution finalised their charges.

He also informed the defendant that if they wish to find a lawyer to represent them then this would be a good chance for them to do so.