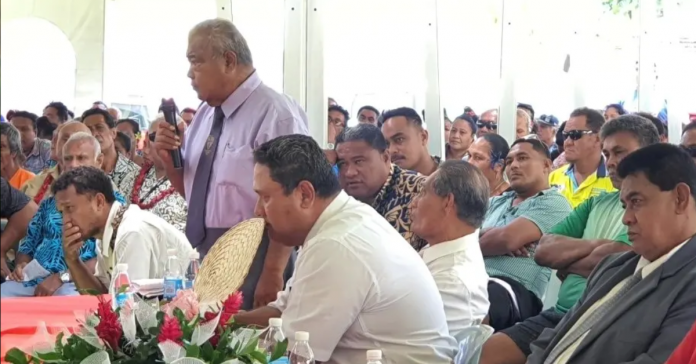 10 January 2021, Apia Samoa.
The Fa’atuatua i le Atua Samoa ua Tasi (FAST) Party continued their national roadshow throughout the week that aims to host an election campaign rally for each electoral constituency as Samoa prepares for the April 2021 general election.

Close to 800 peole gathered into large tests and when the opportunity was given for a Q&A session, many put their hands up wanting to voice their concerns, speaking passionately on various areas of social and economic development.

A matai from Si’usega who identified himself as Tuigamalaga stood to agree with several others who opposed plans for a new wharf at Vaiusu.

“It needs to be stopped please, I am worried about the future of our generations to come,” he said.

“This wharf development is not a need; it is best if we put our future generations first to be considered as our priority,” Tuigamala said.

He also requested Government  to establish a new school building to be located where the Fiafia Park currently operates from Tafa’igata.

“We don’t need this (Fiafia Park) but it’s a must to have a second high school for the area like Faleata College which is now overcrowded,” Tuigamala continued.

A doctor by profession, Ulugia Dr Tito Kamu stood to agree with a new hospital to service the people of the constituency.

“There is nothing we can do about that (wharf) because the Government will go ahead with it, but the school issue is something we can and will prioritise; if you bring us in at the next general election,” La’auli said.

Another voter called for an increase to minimum wage. She challenged Faleata II MP, Leatinu’u Faumuina Wayne Fong to make this his priority when he returns as their representative.

“At the moment the minimum wage of $2.50 doesn’t even help our families with the many expenses and fa’alavelave we face every day,” she said.

La’auli responded that FAST would implement a minimum wage of $3.50 an hour if they came into power.

A woman from Nu’ufou raised the issue of the Accident Compensation levy that was being deducted from the wages of all income earners.

She said this deduction should be stopped because there are no tangible benefits for workers and even when there is an accident, the benefits are either very minimal, or difficult to access.

Another woman from the same village agreed and added that tax refunds should be reinstated as was the case in Samoa in the past.

As was also highlighted on a pamphlet distributed to all who attended FAST promises to grow the economy by 20% and create 20,000 new jobs in 5 years.

In terms of economic development FAST says it will launch a review into the “correct state (tulaga sa’o) of foreign debt, income and expenditure, future developments and major projects..”

The FAST manifesto states it is a concern that the economy of Samoa remains heavily reliant upon loans from International Finance Institutions and foreign aid from development partners, as well as remittances from diaspora.

FAST say they will strengthen the government tender process, and further release the implementation of economic development to the community, the private sector and to NGOs.

Laauli highlighted one of their strategies to set aside $51 million tala be distributed to every constituency for development initiatives.. “to support good governance, protect the environment as well as uphold the social stability of its people..”

“That is $1 million tala every year, given to communities, to implement projects… and then the next year, you get another $1 million!”, Laauli told Faleata II.

FAST says it is their intention to set aside a further $200 million tala a year to create employment by supporting growth in business and exports.

The monthly pension scheme would increase to $200 and costs of services such as electricity, water, motor vehicle licensing, and ferry costs to Savaii would decrease by 20%.

The FAST party will continue their roadshow with community engagement rallies to every constituency in Savaii and Upolu until the April general elections.